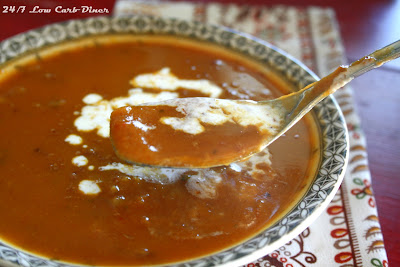 My poor mama had to have three teeth pulled yesterday. She will be on soft foods for awhile. But that doesn't mean bland foods. We both love a little spicy heat, so I made this chipotle pumpkin soup. Now that is not an original idea, but I made this a skinny version. Just a touch of cream. I got added creaminess from Silk Cashew Milk instead. I am trying out a JUDDD style eating plan, limiting calories every other day. It seems to be working, albeit really slowly. This soup is really low calorie and lower fat, while still being low carb. It is very flavorful, though! We both just loved it. If you aren't cutting calories, feel free to substitute cream or half and half for the cashew milk, and add some cheese. (I added cheese for my mom)

My husband did not even try this--he just won't do much of anything with chipotle peppers. I left him on his own for lunch. It was odd having him home on Friday (our school has a job training program on Fridays so I don't teach). Unfortunately, he was laid off last week. The radio station he had worked at for over 25 years was sold, and now he has to start over. Prayers would be greatly appreciated! If he doesn't find another position, he and I plan to do some creative things with the blog and e-books while he draws unemployment. It is a little scary, but we have faith that God has a plan. I am so glad we have my part time teaching to help provide!

Dice onion very finely. Saute in a non stick skillet with coconut oil. When onions are lightly browned, transfer to a soup pot or Dutch oven. Stir in pumpkin, sweetener and spices. Slowly stir in chicken broth a little at a time. Add cashew milk and salsa. Simmer for 20 minutes. Before serving, stir in lime juice. Top each bowl with a tablespoon of cream and bacon sprinkles.

This was so tasty. Spicy enough to satisfy. I would suggest a salad alongside. Maybe a small chicken breast. Perfect low calorie, low carb, meal. You could go higher or lower in fat for the eating plan you follow. I understand that fat is not the enemy, I just don't need many calories these days. Sad but true. With this, I won't feel deprived at all!

Lisa - praying hard for your hubby to find a new job soon. That uncertainty can be very stressful, but having God's promises to lean on is what gets us through. Keep us posted!

Did you know that you can create short links with AdFly and get cash from every click on your short urls.

The meaning of this is that you actually burn fat by consuming coconut fats (also coconut milk, coconut cream and coconut oil).

These 3 studies from big medicinal journals are sure to turn the traditional nutrition world upside down!