Cinnamon Swirl Cheesecake and all the Parties 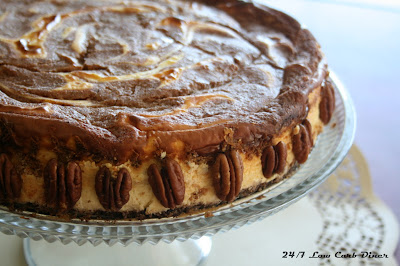 So many events this time of year. I would like to say that I have been baking up a storm for you, but alas, I have not. This year seems to be a little more on the crafty side for some school projects. But no bother, I have chosen one of my favorite desserts that I have never featured here on the blog. It  was a star in the December '15 Diner News. I took it to my Lifegroup party last year and it was a big hit--even among those who would never be low carbers, simply unable to give up sugar! Since I just got home from this year's party, I decided to share it with you now. Tonight I took my Roasted Delicata and Cranberries. I got raves on that dish too!

This is a big, rich cheesecake. Great when you have a crowd to feed. It is prettier than it looks in the photos. The flavor is rich and decadent. So full of the cinnamon flavor, and perfectly complimented with the pecans. That cinnamon sauce is awesome--you might want to make more for other goodies!

Preheat the oven to 350 degrees F. In a medium bowl, melt butter. Stir in the pecan meal and mix until the nuts are moist. Press into the base of a 9 or 10 inch springform pan. Butter your fingers to rub an inch along the base rim of the spring form pan. Bake for ten minutes. Remove crust from oven and change the oven temperature to 500 degrees.

Meanwhile prepare the Cinnamon Sauce: melt butter in a saucepan over medium heat. Stir in sweetener, cinnamon, salt, and cloves and cook while stirring constantly until mixture is smooth. Whisk in coconut flour until well combined. The mixture may be lumpy. Cook 1 minute while stirring constantly. Add half-and-half, one tablespoon at a time, whisking until smooth and thick. Remove from heat.

In a large mixing bowl, beat the cream cheese until fluffy. Incorporate the sweetener 1/4 cup at a time. Add in the salt, cream, lemon juice and vanilla. Beat for 2 minutes. Add the egg yolks and beat until incorporated. Add the eggs, one at a time, continuing to beat between additions. Pour the cheesecake mixture into the pan. Smooth the top and tap for air bubbles. Spoon the cinnamon sauce into circles on top of the batter. Drag a knife through in one direction to make swirls.

Bake on a lower middle rack of the oven for exactly 10 minutes. At the ten minute mark, turn the heat down to 200 degrees. Do not open the door. Bake for 1 1/2 hours. (If top is browning too much, place a foil guard loosely around the edges.) Remove from oven. The cheesecake should be firm around the outer edges and still slightly jiggly in the center. Let cool for 5 minutes, then run a knife along the edge to loosen it and help prevent cracking. Let cool at room temperature for an hour, then transfer to the refrigerator for several hours. 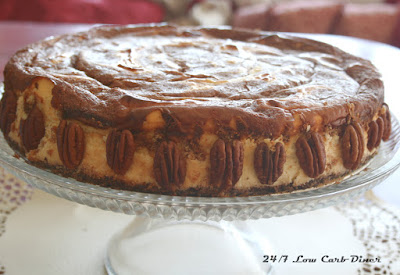 You may, of course substitute almond meal for the crust, and use the sweetener of choice. This is one of those recipes that makes the holiday events special. Hope your season is blessed and your hearts are full of love.

Sorry, I am a bit confused by the statement... "Butter your fingers to rub an inch along the base rim of the spring form pan." And this is apparently after you have pressed the crust into the pan, according to the recipe. Could you please explain this? I have never made a cheesecake before, so I am just clueless.
Thank you!
C. Jester