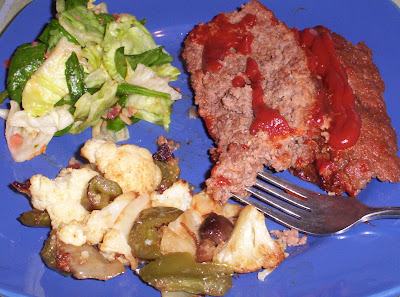 Okay, just what do meatloaf and the ancient Aztec civilization possibly have in common? That is not as strange as you might think--it is the chia seed. This is a remarkable little seed. I generally don't like speciality ingredients, but this is an exception. According to the experts, it was once so valuable, that it was given as tribute to Aztec rulers. For centuries this tiny little seed was used as a staple food by the Indians. Further, it was used as "running" food, as the Aztec warriors subsisted on the Chia seed during the conquests or long treks.

Chia can be eaten dry, although that is certainly not my favorite way of using the seeds. Many recipes use the hydrated seeds, which make a thick gel. A few spoons of Chia seeds in a jar of water will create a gel-forming reaction from the soluble fiber. Once eaten, the gel is great for adding a feeling of fullness, often with fewer calories and carbs consumed. Chia gel is also helpful as an extender for richer foods such as butter or cheese sauces. The seeds themselves are very bland, and absorb the flavors of the food around them. As an additional benefit for diabetics, the gel also creates a physical barrier between carbohydrates and the digestive enzymes that break them down. It is believed to slow the conversion of carbohydrates into sugar.

Tonight, I used chia seeds as a binder. I hear they work well in baked goods, but I haven't tried that yet. However, I can recommend chia as a wonderful binder for meatloaf. I missed the texture I used to get from oatmeal or breadcrumbs. The chia seed substitutes very well, and made my meatloaf tender and flavorful. The loaf was moist, but did not crumble. Try adding about three tablespoons of chia seed meal to your favorite meatloaf recipe in place of the starch. The result is outstanding. We had our meatloaf with roasted vegetables, easy to do while the oven is hot, and a bacon vinaigrette salad. I had to hide the leftovers to keep my hubby out of them. He will thank me when he gets to eat the meatloaf again for lunch later in the week.

While I was playing with these little miracle seeds, I thought about the gelling properties and how it could be used in puddings. An online search gave me some ideas. My first experiment, a simple mix with sweetened cream was alright, but not quite the same as tapioca. I like today's experiment much better. It will be dessert tonight--Coconut Cream Pudding. I'll give you directions for that tomorrow.

FYI, I bought my Chia seeds, aka Blanco Salvia, at Netrition, but plan to order more through Nutty Guys when I get some almond flour.

Posted by Lisa Marshall at 6:57 PM