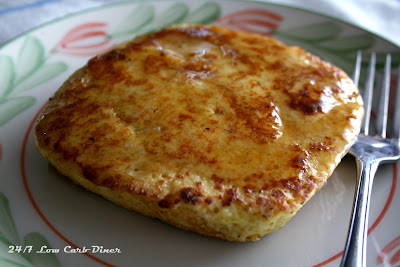 I have been so lax about photographing and reviewing the wonderful recipes in the newer Low Carbing Among Friends books. Starting and running an alternative school is a load of work! But hey, we all have lives, right? This morning I made this French Toast recipe from Ginny in the Low Carbing Among Friends Volume 2. It is on page 187. If you don't have the book, go get it now!  Go here.

We really liked it, although I had to change up one ingredient. Ginny's recipe calls for almond flour and Parmesan cheese. I had some cheese, but when I grabbed it, I found out the one I had left had crushed red pepper and Italian seasonings added. Not such a great match with French Toast. I decided to try a substitution of Golden Flax meal. Thankfully, that choice worked very well. The recipe is for one and goes together really quickly. The batter is baked in the microwave oven in under 2 minutes. Wow.  That is easy. I found a little Corningware casserole dish that is the perfect size for one piece of bread. Ginny says this can also be made into Texas Toast--you know the thick cut bread. It does bake up nice and thick. That is great since it doesn't fall apart after being dipped in the egg mixture.

I like to use a screaming hot cast iron skillet, so my French Toast cooked up faster than the recipe calls for. I even held it with the spatula to brown the sides a little bit. Just a bit of sugarfree syrup and breakfast was done. Really filling too. One piece will do ya!

This Easter weekend, my newlyweds are bringing their panini machine for sandwiches. I think this just might be the bread of choice for us low carbers. The thickness is going to work very well in the press.  I will keep you updated on that when the time comes.Until then, go make yourself some yummy French Toast. Thanks Ginny. Go check out her blog too. Ginny is a diabetic's inspiration! She may not know it, but I have been a fan since the days we first began low carbing for my Hubby's diabetes. You could say that I was probably her stalker on the Bernstein forum. She and I just gel because we both like to make real foods that feed our families and pass the "man" test! When you meet people who have maintained this way of eating for years, then you know it is the real thing.

Aw thanks Lisa! You are so sweet! I had no idea I was being stalked, lol. ;) I am a big fan of your blog as well. Congratulations on your son's marriage too.

Mmmm, haven't had eggy bread for ages. I'm definitely having this for lunch tomorrow :)

Oh.My.Gosh! Love this!
Great blog here so excited to follow along!
Your newest fan,
Ashlee@ABpetie
http://abpetite.blogspot.com/