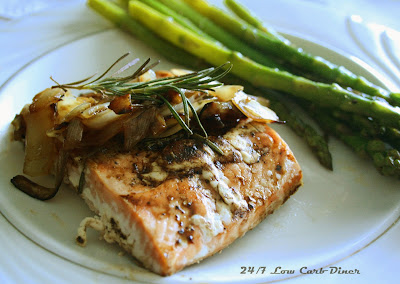 Not my regular Diner fare. This lunch was shared with my mom today--a girly meal. I don't do many of those. She supplied the fresh rosemary and the asparagus. I supplied the salmon and did the cooking. Not being the biggest fish eaters, we decided a flavorful glaze was in order. I found this method  at Victory or Death in the Kitchen and decided to adapt it just a bit. As usual, I read the recipe and then headed into the kitchen to do what felt natural. Far less vinegar and lighter on the rosemary too. I didn't grill, but slightly overbaked our fillets (not the plan), but they were still pretty good. I will put the changes I will make next time into the recipe below.

I think I will post the recipe for the asparagus later, as I did a little special thing with some browned butter.  Be looking for the recipe soon--Browned Butter Braised Asparagus. Yummmmmm. Seems to me that asparagus is either too soft and mushy or still stringy at the base. This method worked.  Maybe I was paying more attention to the vegetables than the salmon. That could have something to do with overbaking a tad. Maybe just maybe. My friends know I tend to overcook everything if given the chance. Don't be telling me I burned the onions. That is the way I like them--those little crispy dark brown ends. You can keep yours lightly golden.

This recipe is for 2. Feel free to multiply for more servings.

Brush salmon fillets with olive oil. Sprinkle with salt and pepper. Place each fillet on a foil square. Top with a  sprig of rosemary. Close the foil and bake at 450 degrees for 15 minutes. Remove the fillets from the oven.  Open the foil packets and return to the oven to bake for another 5-10 minutes. Fish should flake at the thickest part.

While foil is baking, slice onion into slivers. Saute in olive oil until browned. Stir in vinegar and set aside. To assemble glaze, place vinegar, water and rosemary leaves in a small saucepan. Cook over low heat until reduced by half. When salmon is fully cooked, remove and reserve the rosemary sprig and place each fillet in the saucepan to coat with glaze. Plate the fish and top with onions. Place the reserved rosemary sprig on top and serve.

My mom's friend offered up the rosemary from her large potted plant that mom swore was as big as the landscaping bushes. Wouldn't that be nice to have!? We are having a freeze tonight. Because I was thinking of getting a large rosemary bush for my mom for Mother's Day--do any of you know how these large plants survive freezing? I certainly don't want her trying to haul it inside for winter. I don't have a green thumb, so I really don't know these things. In the mean time, she also brought some thyme. What shall I do with that? I felt bad that I hadn't started anything out in my pots. Now that the next two nights are freezing temperatures, I don't feel so guilty.  Brr.

Email ThisBlogThis!Share to TwitterShare to FacebookShare to Pinterest
Labels: seafood