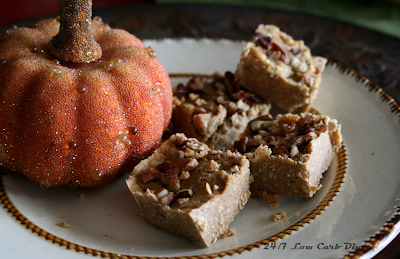 I have always wanted to make a fudge type treat for my school lunches. I love coconut oil candies, but they are a little unreliable in a lunch box. A little heat and you have a mess on your hands. I know a lot of you use coconut butter to add some stability, but I was too cheap to experiment. Then I started noticing lots of recipes for making your own coconut butter. Still, I wasn't sure if my Ninja could handle the time it takes to get that job done. Yes, you do have to run your machine quite a while to turn unsweetened coconut flakes into coconut butter. Except those of you who can brag about your Vitamix. I don't have one of those and so far Santa has not left one under the tree for me. I might try again this year.

In the meantime, I was out shopping at Big Lots last weekend, armed with my 20% off coupon. I saw a factory reconditioned food processor all alone on one bottom shelf. I left without it. Afterall, I need a kitchen remodel to hold all my appliances, despite the fact that I have a tiny kitchen with almost no storage. This Black and Decker model is hefty. I told my guys about it and they both agreed that I should use my coupon and a gift card to go get it. Yes, Pearson was willing to let the coffee area become even more crowded. What a sweet guy. I began to have visions of more mayo, nut butters and coleslaw. Yes, I recently killed yet another immersion blender--my standby for home made mayo.

My first project was to make the coconut butter. I figured if it burned out the food processor, I still had the chance to take it back to the store. It took awhile, but it did magically turn my dry coconut shreds into a fine coconut butter. At least I think it is fine--I have never actually tasted commercial varieties.I think home made might be a touch more gritty than the store bought variety. The photo below was taken  before it completely cooled. It was still a little liquidy. After a few hours at room temperature, it became solid. In fact, in a cool kitchen after a week, it needs to be heated just a bit to be spoonable. A few minutes in a bowl of hot water ought to do the trick--or a quick trip to the microwave oven. 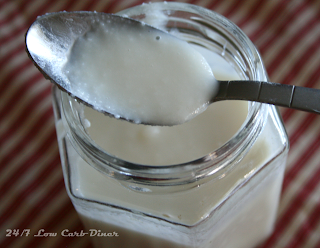 The recipe is too easy, it is hardly a recipe at all. I simple processed 8 ounces of unsweetened shredded coconut with 1 tbsp coconut oil and a pinch of salt. I processed mine for about 20 minutes, stopping to scrape down the sides about 4 times. I honestly don't think mine changed much the last 5 minutes. This is going to be one of those processes that has some wiggle room. I think the moisture content of the coconut you use will make a difference in the amount of time needed to process. Just be sure not to use fresh coconut, and not the type that says desiccated. I think that would be too dry. Either shredded or flaked should work, and of course, no sugar.Mine made about a cup of butter. Maybe a bit more. I honestly didn't measure, I just poured it into a jar.

With that made, I set to work on a wonderful fall themed fudge. Fudge may be a misnomer, because there is no chocolate here. I have wanted to make something like this for several years. I tasted one once with sweetened condensed milk and vanilla chips. Both of those are tricky to substitute. This fudge is not quite the same, with the unmistakable flavor of the coconut, but it is delicious. It is rich, and held up just fine in my lunch bag. 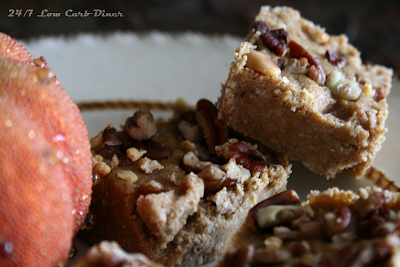 Warm coconut butter if not spoonable. In a medium bowl, combine coconut butter, pumpkin puree, coconut oil, spice, vanilla, stevia and salt. Spoon mixture into a sprayed or plastic wrap lined loaf pan. Smooth the mixture on top. If using pecans, press them into the top of the fudge. Chill for 30 minutes to firm up. Slice into 15 squares. 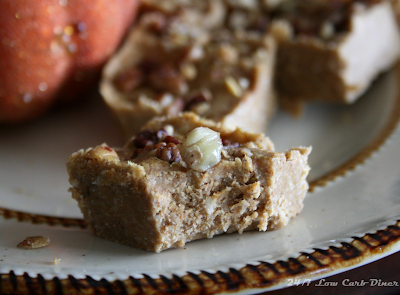 This stuff is so yummy. Add a little more of the pumpkin pie spice if you want. The toasted pecans pressing into the top are very nice too. They add to the texture. I made some with and some without because my Pearson is a nut hater. I know. He is weird like that. Not allergic, just not a fan. He loves his pumpkin pie, though, so this works for him. I am not sure on the carb count of the coconut butter. If I go by the brand that I used these would have 3 1/2 carbsper serving for the coconut  butter alone. But nutrition info is all over the place--for other brands, Bob's Red Mill lists 2 net carbs for the same amount by weight. Commercial brands of coconut butter seem to list more fiber, so the net also ends up at 2 g for a 2 tbsp serving, I would think that is closer, but feel free to do your own math. I still don't have a nutrition program since my computer was stolen. Since we don't count daily, it is not our priority. Sorry for those of you who are more strict about that. Only so many hours in a day.

So now back to prep day for me. Today I am doing some Green Chile Chicken Shreds, a Breakfast Bonanza casserole and  Hazelnut Pumpkin Custard. Some day I will get tired of the pumpkin flavored goodies, but today is not that day!

Posted by Lisa Marshall at 3:18 PM

Looks good. The coloring reminds me of Maple fudge! Would LOVE to see a recipe of that too! Haven't had since GF/SF : (

This would probably work well as maple fudge. Will work on that soon.

I made my own coconut butter too. I prepared it in my 45 yr.old *little pro*(Cuisinart). By the way never replace these old gems with new versions because they build differently now and the motors burn out much faster.
When preparing the coconut butter I let the motor rest and cool down a bit in between the running time . It turned out nicely. I compared it to the purchased product and I much prefer my butter. It has a better mouth feel!
Thank you Lisa for the recipe!
May I tell you how stunning you look- just beautiful! Barbara.

Well hello yum!! This is great and coconut is my favorite food( if chocolate doesn't count��;) Great recipe!!

Just made this fudge today and it's great! I've started a keto diet and need some "fat bombs". This is my favorite recipe so far!

Oh my gosh...I MUST try this. Pinning now!!! You can bring me some anytime you make it!!!

This means that you actually get rid of fat by eating Coconut Fats (in addition to coconut milk, coconut cream and coconut oil).

These 3 studies from big medicinal journals are sure to turn the traditional nutrition world around!