It is sometimes difficult to eat low carb when the rest of the family does not follow the same plan. I refuse to make separate meals. Here at our house, I make low carb main dishes and side dishes. Then I supplement the meal with whole grains for my carb eaters. I keep some cooked rice in the freezer to keep meals simple and usually have some whole grain tortillas handy.

My son Pearson has benefited greatly from our low carb diet. During his early teens, Pearson began showing signs of Insulin Resistance, although I didn't know what it was at the time. He suffered weight gain, skin tags and acanthosis nigricans, a darkening of the skin at the neck and underarms. I was constantly trying to get the boy to wash his neck, thinking it was merely dirt!

When my husband John was formally diagnosed as a diabetic, research led me to the complete understanding of my son's problem. We decided to try a diet formulated for Insulin Resistance. He began to eat moderately low carb, and always balanced the carbs he did eat with appropriate protein. He did not count carbs, but he did give up sodas and sweets. His results have been outstanding! I am so proud of him. He continues to limit his carbs and balance his meals even while at college. Admittedly, this is much harder to do in a dorm and the cafeteria than it is with a concerned low carb mom. He has done a wonderful job and has avoided that dreaded freshman weight gain. Now that he is much slimmer, he has taken to playing racketball and using the school's workout facilities. It has become a lifestyle for him, and that is the key to success. 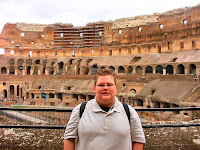 He has lost even more weight since this picture.
What a success story!

He looks awesome! I seem to be having no luck losing weight yet! I lost 5 pounds at the beginning but then gained that back and maybe even a little more. ARGH!!