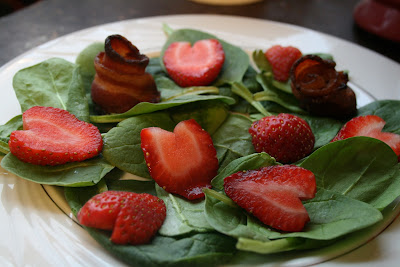 This is my last chance to give you some inspiration for Valentine's Day tomorrow. It is a pretty salad--pretty because of the sliced strawberries, lovingly cut into hearts. It is a delicious salad too because it features a man's favorite rose, the bacon rose. The base is a simple plate of spinach leaves and everything is topped with a light vinaigrette dressing. Voila! ( I had not added any dressing yet in the photo because I had to shoot it too long before we actually got to serve the salad. Ahh, that elusive natural lighting!)

Making the strawberry hearts is pretty straightforward. I sliced mine with a V shape on top to make a heart. Then I sliced each berry into thirds. Pretty and no fuss. 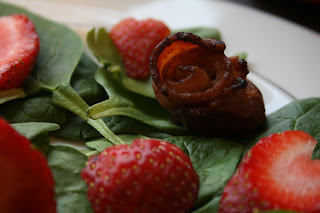 The roses are a little more complicated, though they could probably be made simpler. For those who are eating really clean, just use bacon with no sweeteners. They certainly don't need to be sweet. But today, I chose to make ours as maple crusted bacon. To do that, I added a few drops of maple flavoring to about 1/4 cup of my erythritol blend. I then dredged each slice of bacon in the sweetener mix. I made a  couple of roses by simply rolling the bacon in a spiral shape and baking them upright. I tried making a heart shape of flattened bacon. I have seen those on Pinterest, but my shapes did not hold. Those got eaten right away! I am trying to keep the hubby away from those roses until tomorrow. Good luck there, he knows I have them. Of course, the dog is putting in his bid for the bacon too. Cooking bacon must be torture for a sensitive dog nose.

Are you all making anything special for Valentine's Day dinner? I would love to hear your ideas.

Posted by Lisa Marshall at 6:11 PM

Email ThisBlogThis!Share to TwitterShare to FacebookShare to Pinterest
Labels: pork, salad, side dish

This looks so good. sandie