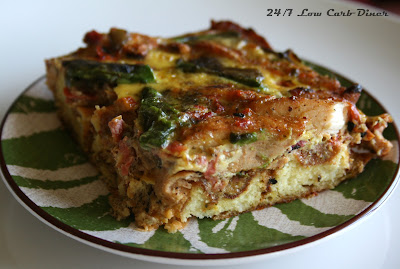 This casserole is amazing. You would never know it is low carb. Ever. You know all those breakfast casseroles that use bread, biscuits, stuffing, potatoes, etc for a base? And we can't use those, and end up with a much eggier version? This casserole solves that problem. You would swear this is a traditional bread based casserole. My secret weapon of choice today was the addition of almond flour waffles. I used my waffle stick baker, but any Belgian style machine would work.

Beyond that, the Southwest flavors are great for a change of pace. Now, if you aren't familiar in working the Diner system, this casserole will involve a few steps to assemble. If you are a Diner, you probably have some frozen waffles in the freezer, some chicken cubes in the freezer, and maybe even some cilantro pesto in the freezer. Catch the theme here? Yes, I almost always cook once and eat multiple times. That is the essence of the Diner system. You can still make this recipe from scratch, so I will give you that recipe here. I was testing this recipe as a green casserole for my Diner News, but the green colors kind of baked out. I will share it here instead. 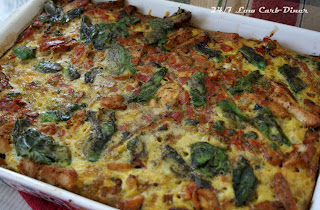 I would suggest that you could make life easier in the months ahead if you make a triple batch of the waffles. They will be great later with chili poured over them, as breakfast wafflewiches, or as the base for another version of a breakfast casserole. You could even eat them with sugarfree syrup, but I would suggest reducing the amount of salt.


In addition to the waffles, it is also a great time to make a batch of chicken cubes. I use breast meat because it is easier to slice. You can prepare it however you want, baked, grilled, even poached. You can go plain, or use a marinade. This recipe used mesquite marinated chicken. The remaining chicken is awesome in omelets, skillet dishes, salads and even as a pizza topping.

I made my Cilantro Chile Pesto last summer. I love to keep extra summer herbs in the freezer for winter. This gave me fantastic flavor for this dish. Go ahead and make up a batch. It freezes really well and will flavor soups and casseroles, even grilled veggies and meats.

Now, if you already had those done like I did, this recipe will go together quickly. If not, the time is an investment in the future. You can pat yourself on the back when another meal goes together so easily.

Preheat oven to 350 degrees. In a medium bowl, combine almond flour, baking soda and salt. To the dry ingredients, add the eggs, half and half and oil. Mix well and spoon into a greased Belgian waffle maker. Bake until nicely browned and crisped. Line the waffles into the base of a 9" x 13" casserole dish. (It is fine to tear apart some pieces of waffle to fill in gaps as best as possible.)

Sprinkle the shredded cheese over the waffles and bake for about 5 minutes to melt the cheese into the waffles. This will help keep them from becoming too soggy.


Grill or bake the chicken if you don't have pre-cooked chicken. Cut into cubes. In a medium bowl, add the cubed chicken. Sprinkle the liquid smoke flavoring over the chicken and toss well to distribute the flavoring. Remove the waffle base from the oven and spoon the chicken mixture over the waffles.


In the bowl used with the chicken, add the eggs, salsa and Cilantro Chile Pesto. Beat all ingredients until very well combined. Pour this mixture over the chicken and waffles. Cube the avocado. Distribute the avocado cubes over the top of the casserole, using the back of a spoon to slightly press them into the wet ingredients.


Bake the casserole for 35-40 minutes, or until the center is set. Let rest 10 minutes before cutting.

This would be good served with some extra sour cream or some hot sauce for those who prefer more heat. The avocado gets very soft. If you prefer a firmer texture, add that after baking rather than before.  My guys are not huge avocado fans, so I chose to blend mine into the casserole a bit more.

So even though the Cilantro Chile Pesto turns the egg mixture green, the color disappeared upon baking. I suppose you could use more, but the flavor is nice. A little chipotle chili powder would also be good to add to the egg mixture. My marinade for the chicken had some chile heat added, but I am trying to keep the recipe a little simpler, and easier to duplicate. If you are a pepper expert, add some. This is definitely a recipe to play around with. I will be trying some more traditional breakfast bakes now that I know the waffles work so well. This dish, with the spicy chicken, could easily be a lunch or dinner entree as well. Super versatile!


Get more great recipes at the Low Carbing Among Friends Facebook Page:               https://www.facebook.com/LowCarbingAmongFriends
Order our books at: http://amongfriends.us/24-7-LCD.php
Love the recipes I share on this blog? My ebook helps you plan and prep to stay healthy 24/7.   http://www.247lowcarbdiner.com

Posted by Lisa Marshall at 2:28 PM

Can't wait to try it!