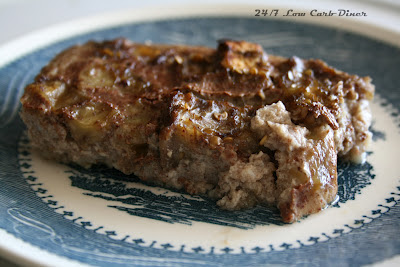 Who woulda thunk? Low Carb Bread Pudding made without bread. Even without a low carb bread. No need to buy the pricy bread or take the extra step of making a low carb bread substitute. Maria is the queen of substitutions. This one was a secret ingredient. Eggplant. I promise that woman knows a million recipes for eggplant--none of which seem like an eggplant. She can turn the humble veggie into most anything!

My family does not like bread pudding. I happen to like bread pudding...some better than others. In the world of bread pudding, this one ranks somewhere in the middle. It is not a super decadent, high calorie, rich comfort food. But then, that is not what Maria was going for. She purposely substituted to make a lower calorie, healthier dessert. She wins big there. It is definitely better than some bread puddings I have tasted in my life--even those actually made with bread! Almond milk replaces heavy cream, erythritol and stevia serve to sweeten, and of course, eggplant cubes stand in for bread. How does she do that? Maria's recipe is on page 150 of Low Carbing Among Friends I. You can still order that, and order the next volume as well. Just click the link on the right. I don't have a copy yet, but soon I will be testing recipes from the new book too. So much good food.

I do miss the crunchier edges you get when a bread crust sticks out of the custard. This did not have that. The custard itself is remarkably like the original high carb version. Maria says her taste testers could not identify it as eggplant, so there you go. (In case you can't get over such an odd substitution.) It is worth a try. I used coconut oil because I was out of butter. I would definitely go with the butter next time.

I am eating mine plain. A scoop of ice cream would take it up a level! (Maybe even a gourmet sauce) I should get myself in gear and make some. I haven't done that all summer. My bad. I think I just may try that this evening. Then maybe I can get my bread pudding haters to at least try this one tonight. If not, it will be breakfast for the next few days.

With a very short break from the heat, I dared to turn on my oven this morning. Although I did regret it by 11 am, I managed to get a new egg recipe done. Just think pesto and sun dried tomatoes. Those went to work with hubby, but I will feature the recipe soon.

Posted by Lisa Marshall at 1:10 PM

Maria is, indeed, awesome. I love her recipes!! Glad you included them in your book.

The meaning of this is that you actually get rid of fat by consuming coconut fats (in addition to coconut milk, coconut cream and coconut oil).

These 3 studies from large medical journals are sure to turn the conventional nutrition world around!