Baba Ganoush a la My Students 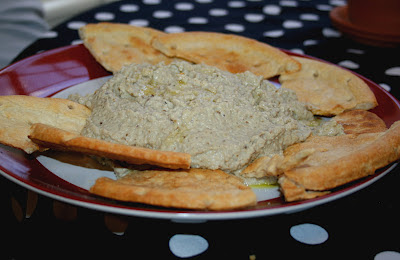 On Fridays at our "school" we have an international cooking club. Today I talked the Element kids into making baba ganoush.  They loved saying it, but after seeing the eggplant, they were not so sure! Let's get the academics out of the way, since we are talking school here. Yes, there are different ways of spelling it. I am personally not that fond of silent H, so I chose the simpler version. Spelling should not be so complicated. In addition, different countries claim their own version. Let's just say we settled with Middle Eastern. We could get into a lesson about the Levant, but this was cooking not ancient history class.

In the photo, you will see real bread. Ignore that. The school kids are not low carbing. The dip is, so that's okay. Actually, since the start of school, they have also made a cheese souffle and cheese fondue. Both low carb. Can you guess who the teacher is?

Also, we made our tahini from scratch. What was easy for me at home turned into an interesting experience. Transferring sesame seeds into a blender is not such an easy task--even for two people. Maybe especially for two people. I am not sure.. Let's just say we will be finding sesame seeds every time we sweep or even open kitchen drawers for awhile.

This kitchen fun had to fit in between my Blogging as Composition class, Secrets of Mental Math and Improv  Theater. See how much fun we have?

I loosely followed several online recipes, including one from the Pioneer Woman. She lives in my neck of the woods. Don't actually know her, but we do travel in some of the same education circles. Friends of friends kinda thing. I guess cooking blogs are a dime a dozen. OK. Hers is more like a hundred grand...Sometimes I envy not having to make all my selections low carb and healthy. Oh well, I love my little blog too, and she is way funnier than me. But I digress...

Back to that fun to pronounce baba stuff. We are still under a burn ban here, so absolutely no grilling the eggplant outdoors. That is what I would do if I could and it was not still 104 degrees. The trick is to blacken the skin. Because we had to do ours inside, on a yucky electric coil to boot, we also had to bake in the oven. You can do it all in the oven, you just won't get the layer of the blackened taste. Maybe you won't get the smoke we got either. We had to bake our tough little eggplant for 35 minutes. Do a little prep, go take a class. Works for an alternative program like ours. No bells.

Now the part that really had the kids worried. I informed them that once roasted and skinned, the eggplant would like like the pregnant starfish I dissected in high school. My son Christian thought it looked more like squid. Don't ask me about the time we tried to dissect those. I must be cursed when it comes to teaching biology. I have more horror stories than you would care to know. I digress again.

I must admit that once the squeamish among them got that look in their eyes, I decided to hide that part from them. Want to see what it looked like?  Head over and take a look on Ree's blog. Lovely. I peeled the eggplant and scooped that stuff into the blender before I called them back from their reading. Whoo. That worked. 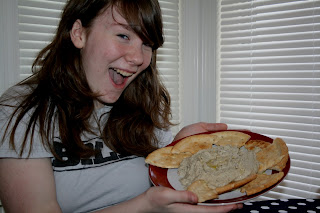 The teens added all the rest. Everyone who tasted it rather liked it. Maybe not a meal for the gods, but we liked it. Personally for me, I would have upped the lemon a bit. Some thought it needed pepper. I think this is one of those recipes you can up the ingredients to your own personal taste. I had already added more than Ree, so I assumed ours would be extra flavorful. Not overpowering at all, so do what you want!

Blacken the eggplant over a grill or burner. Bake until soft inside, 30-45 minutes. Peel the eggplant and place the insides into a blender. Add tahini and 2 tbsp of the olive oil. Blend. Add in lemon juice, garlic and spices. Blend again.  Pour from the blender onto a plate. Pour remaining olive oil over the mixture. Garnish with fresh parsley and an additional sprinkle of sesame seeds. Chill or let rest an hour to allow flavors to blend.

We served ours with baked pizza crust, but for low carbers, add some traditional olives. I think jicama chips and cucumber slices would be good too. Joseph's Lavash bread is a great choice if you don't need to be gluten free.