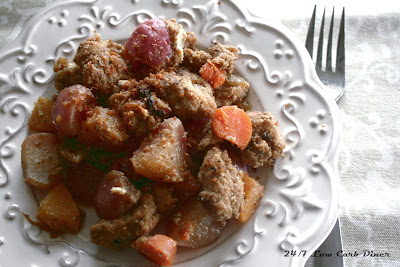 My hubby bought me a Dutch oven as a gift. All these years in the kitchen and I never had a real cast iron dutch oven. Go figure. Today I tried out a new recipe using it. I think he felt a little sad that it took me so long to use it. Alas, with the refinishing of all the old cabinets, my kitchen has been a mess. We are halfway done. I decided to put the kitchen back together and get the rest of the cabinets redone, and the new ones added, during spring break. There are so many steps involved in taking my kitchen from the original honey oak to a stained, distressed linen color. I like the transformation, but it is so much time involved. Goodbye wood stained hands, this week, I will cook.

In looking for recipe ideas specifically for Dutch ovens, you find very few that are low carb. Of course, I know that this will be great for chili, stew and whole chicken, but today I wanted to try something unique. I found this recipe for Sprite Chicken, from Life in the Lofthouse and decided to convert it to low carb. Cooking with lemon lime soda sounded interesting, and I saw several variations for the campfire version. I tend to like a the sweet and savory combo, so I tried it. Some call for cheese to be added, but I wanted to see if I could taste the soda. I am a little sad, that I really don't taste it. Just a hint of sweetness. 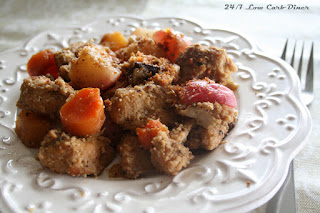 Diet Sprite won't work because of the aspartame, but I have a Soda Stream and have some sucralose sweetened lemon lime beverage. I avoid aspartame as much as possible, and would always choose Splenda over it. Generally, I sweeten everything with stevia or a blend of stevia and erythritol. I would suggest Zevia if you want to try this recipe. Even if you choose to drink aspartame sweetened sodas, the heat would break down the sweetness.

So, no "Wow! What is the secret ingredient in this?"  This is more like a comfort food casserole of chicken and root veggies. The original recipe calls for potatoes. I subbed radishes and rutabaga. That worked. Radishes held their shape. They are a little watery, but mild in flavor. The pink color is reminiscent of red potatoes and looks so nice with the bright orange of the carrots. Far fewer carrots to keep the carbs down a bit. But don't leave them out. So pretty!


So why the name you ask? Sprite. (Yes, I looked it up) I had no idea that it was an imaginary little being endowed with magical powers--synonyms of fairie, goblin, brownie, elf, gremlin, pixie, and the one I chose--Gnome. It seemed a little more earthy and fun. Not girly and certainly not chocolate which would have been so confusing if I had chosen "brownie." Gnome it is! 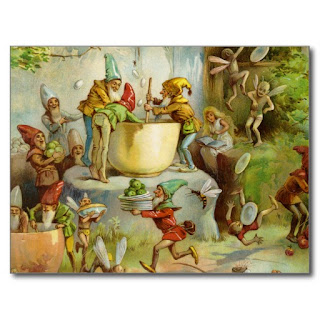 A little coconut flour replaces wheat flour and coats the chicken pieces to be nicely browned. The chicken tastes very flavorful since it browns in the bacon fat. Our Trader Joe's just opened up this past week, and I was able to get the package of end pieces to use for this recipe. Those fried up nicely in my new cookware. It was nice being able to fry and then bake in the same pot. With all the veggies added in, all I had to do was put the lid on and get the whole thing into the oven. That is a feat unto itself. Cast iron cookery is not for the weak! I think it would take many a gnome to carry this one. 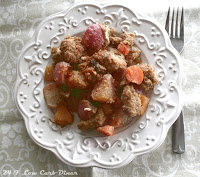 In a Dutch oven, fry bacon. While that is browning, dice vegetables. When bacon is browned, remove it from the pot and set aside, reserving the fat. Add the onions to the pot and stir. Turn heat down to low and brown. While onion is browning, dice chicken. Add half the salt and seasoning blend to the coconut flour. Toss the chicken pieces with the flour mixture. Add chicken to the pan. Brown on all sides. When browned, add radishes, carrots and rutabaga. Sprinkle with remaining seasoning and crumbled bacon. Pour lemon lime soda over the top. Place the lid on the pot and bake 1 hour at 350 degrees. Remove from oven and let sit, covered, for 10 minutes. Stir and serve. Add cheese if desired. 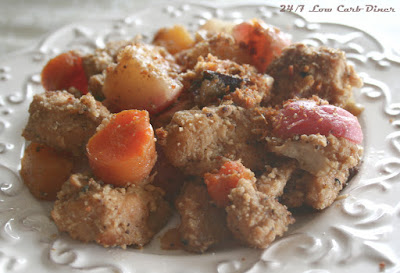 So this has us fed for the day, and a meal later this week too. In case you are interested in kitcheny stuff, I will give you a peek at my new cabinets. The lighting is terrible. I have no windows in my tiny kitchen. I promise these really are the same color, just two different angles. We wanted to lighten the kitchen up a bit, so we went light. My drawers were in terrible shape, and those are not getting replaced. The builder did a terrible job 20 odd years ago and all my drawer fronts have had to be supported with screws and L brackets, which ended up showing in the front. I have tried to hide that with some scrapbook paper Mod-Podged on the front. I like the style. The bumps still show a little, but it is a vast improvement.  I love the red and the French Country look I am slowly getting. Everything matches my distressed red table that you see so often in my photos. It is about my only place for photography with a light source! 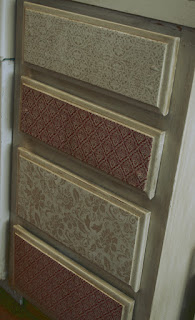 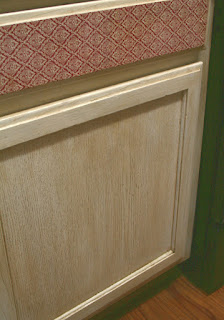 As my Christmas present, my oldest son is paying for new cabinets all along one wall. They are literally sagging and crooked on the wall. Definitely an accident waiting to happen. Maybe leftover damage from that storm a few years ago-maybe just more terrible workmanship. I still have to paint those and the old uppers we will keep. I sure hope the others stay attached to the wall until we are ready. I am so not looking forward to having workers here tearing out the old ones. What a mess that will be. It will be great to have safe, pretty cabinets though. And an update from the honey oak I have had for 20 years.
If you have an electric pressure cooker, be more careful than I have been about protecting the wood from the steam. I will be better with my new finish! I would love to add drawer pulls and knobs, but we will wait until the hubby finds a job! Doing all this work ourselves is keeping it under $100.

Posted by Lisa Marshall at 5:32 PM

pay to write my paper said...

This recipe looks like it was created specially for me! I think has to be super tasty! Besides as I understood it is easy to cook.

Did you know you can create short urls with Shortest and earn money from every visitor to your shortened urls.