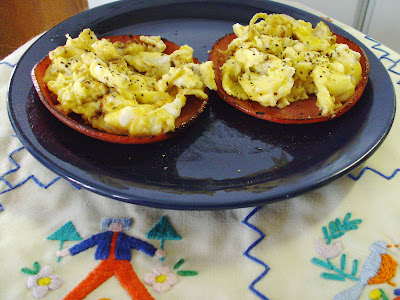 Talk about old fashioned. My mom used to make these when I was a little girl. I thought the bologna was cute all curled up in a bowl shape. I remember trying these for my boys, only to find that bologna no longer curled. When hubby bought this all beef bologna at Aldi, I thought I would give it another try. Look, it worked. Must be the different meat content--maybe bologna didn't have quite as many fillers--or as much chicken back in the old days. I dunno, but I am nostalgic enough to photograph it.

So the recipe is really easy. No gourmets today, please. Okay, no gourmet types would ever be comfortable at my house, but I digress. Fry up a piece of good quality bologna. Once it cups, remove it from the skillet and scramble and egg or two. Place the bologna bowl on a plate and top with scrambled egg. Voila! John had two slices of bologna and three medium eggs, scrambled. He doesn't like cheese melted on, but the kids would have wanted that too.

For dinner, we are feasting on Italian sausage links braised on the stove top. To that I am adding some sauteed cabbage. I use pre-shredded cole slaw mix because it is so much easier than chopping cabbage. Most convenience foods are too expensive, but this is a bargain at Sam's club. I will throw in some bell peppers for added flavor and a bit of tomato sauce. That carby boy will get some pasta. Lots to do today, so I am glad dinner is easy.

Posted by Lisa Marshall at 5:38 PM