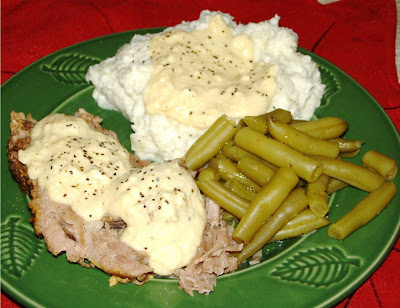 Our Triple Play meat for this week is a huge pork roast. It was so big, that it flooded out of my crock pot and all over the counter. Despite two cleanings, my kitchen counter is still a bit slick! It is worth it though, because this roast is very tender, like only a slow cook can accomplish.

I tried a new flavoring rub on the roast, but it didn't make enough of a difference--probably because this baby was so huge. Because it wasn't a pronounced flavor, I decided to go ahead and make a gravy to serve with it for our first meal.

This is an easy process, and doesn't require any specialty thickeners. Just the humble egg will do the trick.

In a saucepan, whisk eggs. Add drippings (cool a few minutes if they are still hot, or blend with the other liquids before adding to the egg). Stir in cream and broth. Use a whisk to stir this mixture continuously over medium heat. Continue to heat and whisk until the gravy thickens, about five minutes. Remove from heat and season to taste. Serve immediately, as reheating can cause some separation.

I like this gravy better than the sour cream gravy in the ebook. It is milder. You can even make a white gravy/cream sauce by substituting the meat fat with butter. Eggs are the only thickener, and no blender is needed to be lump free.

For this meal, I served some mashed cauliflower and some canned green beans. Tomorow, this same roast will be a major ingredient in a Southwestern Pork soup. John has to be out of the house really early tomorrow, so that will get prepared tonight. Our third meal will come later in the week, with some Carnita style roll ups. This roast is so big, I may have enough left over to add some pulled pork to the freezer.

Posted by Lisa Marshall at 6:18 PM

This sounds really yummy! Thanks for sharing it. I can't wait to try making that gravy!