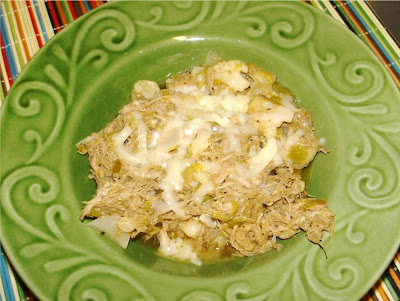 Looking for something unusual? This stew fits the bill. It is mildly like a chili, but slightly sweet and sour too. Fusion cooking I guess.

I had some leftover pork roast in the freezer. I generally add barbecue sauce, but we were in the mood for something different. I looked over some recipes online and found a couple similar to this. One called for raisins, which are a low carb no-no. Besides, I know my guys would frown on that one. I found a few more with apples or potatoes. No go there either. So, I subbed some cauliflower for potatoes, and left out those raisins. I added a bit more green chili since I don't rely on those little cans. I buy big cans of chilies and freeze portions in ice cube trays, then put them all in a big gallon ziploc bag. Easier to add to recipes and big time savings.

The vinegar and sweetener make this dish very unusual, but appealing. Apple cider vinegar is really good for you--especially the natural type with the "mother" allowed to remain. I have been incorporating it more and more into our diet lately. One boy gobbled this up in record time. Another wasn't as pleased and left some in the bowl. You be the judge whether to try it or not. I'll give you the recipe anyway. I really did like the flavor combo, but then, I have been known to like jalapeno jelly. Sweet hot is appealing to me.

Let onion soften in oil until just beginning to brown. Add remaining ingredients and simmer for 30 minutes, checking to make sure pot doesn't dry out. Spoon into bowls and top with cheese or sour cream. You may add some hot sauce if desired.

This goes together very quickly when you have some Freezer Favorites pork roast in the freezer like I did. It would also be a good addition to the Triple Play meals for a pork roast. The flavor is so unique it would not seem like a return of Sunday's dinner at all! For carby eaters, stir in some precooked rice or barley. I keep batches of those in the freezer ready to go too.

I have been spending lots of time in the kitchen lately. We all seem to be on different eating plans these days. My youngest boy is having continued stomach ailments which are not being diagnosed. We are trying out a diet for Irritable Bowel Syndrome for him. Poor guy. He has been suffering too much. This plan has him never combining proteins and starches. His protein meals are easy. Those are my low carb standards. The carb meals are a little tougher around here. Then, my middle son is on the Insulin Resistance eating plan. He eats more carbs than hubby does, but always needs to eat a carb with a protein. That is the exact opposite of the carby boy. I am still cutting calories in cycles, so my meals vary. Yikes! The Diner plan is going to be even more important than ever this summer with so many mouths to feed. I guess you could say my summer job is personal chef!

Where do you find the big cans of green chiles? Thanks. There is a Mexican market here...or used to be. I keep meaning to see if it is still here and check it out.

I get the big cans of chilies at my locally owned grocery store in the institutional aisle. It is the Casa Fiesta brand. Last summer I got a 99 ounce can for under $8. Maybe you can find one locally. They don't sell the big cans online.