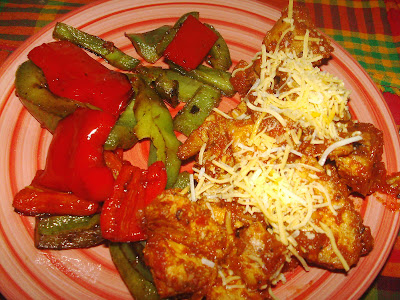 This dinner has a bit of a story. It wasn't exactly planned, but it was successful anyway. Almost every time my hubby grills out, he comes in offering to grill more while the coals are still hot. A while back, a tossed him some fat chicken breasts. Good guy that he is, he put them into a freezer bag after they were cooked. Since it wasn't a regular prep day for me, they didn't get recorded on a freezer list, and I kinda forgot them. Okay, I totally forgot them, so don't neglect that inventory list that comes in the e-book. I sound like the parent who says "Do as I SAY not as I DO" huh? Add a trip to the meat dock sale, and they got buried in the depths of the frozen nothingness know as the bottom back of the appliance.

When I did find them, they had been man-handled pretty well by some larger bags of food and a casserole dish. Unfortunately, the seal had broken and I observed some ice crystals that let me know these were not gonna be the best. Not giving up, but too busy to deal with it at that moment, I put them into another sealable bag and promptly forgot about them again.

Today was a really hectic day, and I pulled these out of the freezer hoping to salvage them. I thawed in the microwave and tasted. Not too bad. A bit freezer burnt, so of course, my plan was to totally inundate the chicken with a really flavorful blend of seasoning and sauces. So, that is what I did. Somehow, the twenty something boy decided they were great. Compliments on freezer burn? Go figure!

Since hubby is off running high school football tonight, I knew it would be a good opportunity to use some spices that are a tad bit too hot for his Yankee tastes. I made a fusion type dish with two of my regional favorites--Mexican and barbecue. The meat already had the grilled out flavor, so I decided that smokey chipotle would compliment that well. I used a liberal amount of my locally blended orange chipotle seasoning on the chicken that I had cut into chunks. If you don't have access to any of that, just add some regular chipotle powder and a packet of True Orange crystals. After that was well coated, I put them into my cast iron skillet with about a cup of tomato juice. Sauce would work fine too. I let that simmer to tenderize the chicken a bit. For seasoning, I added a bit of sweetener and some extra liquid smoke. It made a sweet chipotle barbecue sauce after it cooked down.

The big guy had his in tortillas. The rest of us had our chicken with a side of grilled peppers. I love grilled peppers. We added a touch more home made barbecue sauce to really boost the flavor. Good if you have it, but not essential, I think. This method would work for pre-frozen chicken cubes too, and they don't have to be freezer burnt!

It is really rather humorous that a meal I considered scrapping ended up good enough to blog about. Everyone can use a break now and then.

Posted by Lisa Marshall at 8:08 PM