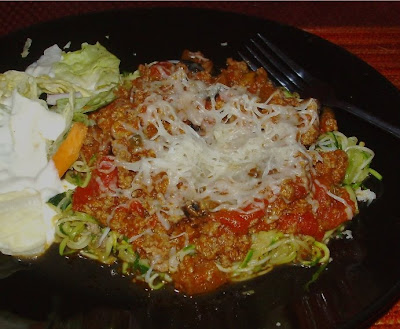 This is part two of what I found at Big Lots this weekend. Another thumbs up around here. Big Lots has stopped carrying my favorite Muir Glen sauce. So sad. This is really good too, and filled with all natural ingredients with no sugar. There is a touch of honey, and only 4 net carbs for a half cup serving. That is doable!

My boys, not the biggest eggplant devotees, liked it. Of course to serve all of us with some to spare, I had to add to the contents of the jar. I almost never cook for just one meal. That is part of the Diner system. The leftover sauce from tonight's dinner could become a soup later on this week, and a pizza sauce. That would make this a Triple Play meal. Alternately, I could freeze the rest as a Freezer Favorite and enjoy the same meal again later.

The ingredients are tomatoes, eggplant, olive and canola oil, carrots, garlic, capers, basil, honey, roasted garlic, salt, sin dried tomatoes, crushed red pepper and oregano. Good stuff. I have seen Lidia's cooking show a few times, but can't claim to know too much about her cooking. The instructions on the bottle say to mix it with olive oil and pasta. I am certainly not doing that. I do know this sauce is tasty, natural and easy to serve. It was $2 a bottle at Big Lots. The meal made low carb was well received at my house. 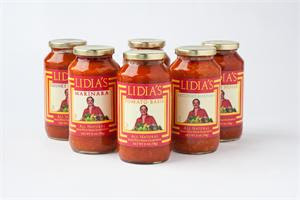 I think this would make a nice veggie salad too. Just mix some pasta sauce with some olive oil and with room temperature veggies and let marinate for a few hours. It would be a good pizza sauce as well. Better buy some while you have the chance. A combo pack of three jars is over $17 if you order online. This way, none of us have to peel and dice an eggplant!

Posted by Lisa Marshall at 7:01 PM