Smoothies and Puddings with Glucomannan 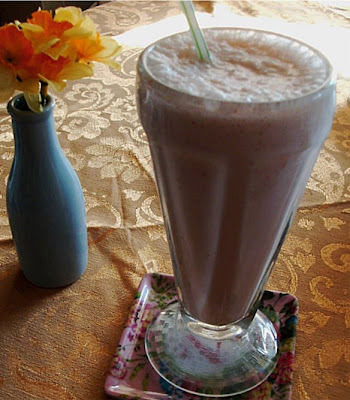 Another situation where I am late to the party. I am just now getting around to trying out glucomannan powder. I knew about it, and even thought about ordering it plenty of times before, but just refused to invest twenty bucks plus a huge shipping cost. I am cheap like that, always have been.

But when I saw it at another vendor, cheaper and less shipping, I knew I had to break down and try it. Afterall, it is supposed to be so good for diabetics. Here is what the Health Diaries had to say about this innocent looking white powder.

Weight Loss
Glucomannan is a soluble fiber that absorbs several times its weight in water and forms a gel in the stomach, giving a feeling of fullness, slowing gastric emptying and slowing the digestion of fats.

Allergy Relief
In mice, glucomannan powder inhibited the development of atopic dermatitis and overproduction of substance P and proinflammatory cytokines. It also inhibited overproduction of IgE, the immunoglobulin that causes most of the body's allergic reactions. (reference)

Lung Cancer Prevention
Studies in mice indicate that glucomannan powder may have a strong inhibitory effect on lung tumors. (reference)

Blood Pressure
In the same study of 63 men, the mens' systolic blood pressure decreased by an average of 2.5%.

Constipation Relief
Glucomannan decreases fecal transit time and provides very good constipation relief thanks to its soluble fiber. The gel that forms in the stomach aids digestion and elimination as well.

Help for Type 2 Diabetes
Glucomannan keeps fasting blood glucose levels stable. In one study, diabetic patients were given glucomannan for 90 days and their fasting glucose levels fell by an average of 29%.

Healthier Meals
It can increase the volume of recipes and be used as a healthy thickener, which allows you to create lower-fat, lower-calories meals and desserts that are good for your overall health.

Sounds good! I will be sharing some more experiments with you soon enough. This is something we don't want to rush. Already this afternoon, I am feeling the tummy rumblings associated with that increase of fiber. Definitely don't want to overdo that one!

This morning, I made two fabulous smoothies. John's was the strawberry cheesecake smoothie in the photo. I used some leftover cold coffee and made a cappucino smoothie for me. Both were good, and had a great thick mouthfeel thanks to the glucomannan. I couldn't tell much difference though from when I add in xanthan gum. Both do the trick. Glucomannan does seem to mix in a little easier though.

I am also playing around with an eggnog flavored pudding. I haven't eaten much of it so far, as mentioned above, I can't spend the day in the bathroom. I will pack it up for lunch at school and work tomorrow. The consistency is not exactly like an old fashioned pudding, but it is tolerable. Not nearly as slimy as xanthan gum. I did detect a little coating on my tongue it seemed. It will be fun to keep playing with this stuff. I have so many flavors of Capella drops, that alone could keep me going for weeks. Then there are the bases--dairy, almond milk, fruits, etc. Should be fun.

Here is what I did for the strawberry smoothie.

Add first six ingredients to blender. Mix well. Sprinkle the glucomannan powder lightly over the surface. Immediately blend again on high. Let the smoothie rest for 5 minutes before serving to allow it to thicken.

For my smoothie, I did basically the same thing using a water and cream mixture rather than the yogurt. I used Capella Cappucino drops to enhance the coffee flavor. I think next time I will add a scoop of vanilla protein powder to up the nutrition.
These smoothies will definitely keep you filled up for a while. A smaller version would make a great late night snack too. It would replace those ice cream cravings I hear some people have. I don't get those, personally.

If you are interested in purchasing some where I did, go to Healthy Village and order a pound for $12.40. I purchased some stevia and some dehydrated veggies while I was there too.

Posted by Lisa Marshall at 4:39 PM

Can you reveal the source of the glucomannan powder as I would like to try it, but have the same issue with the cost.

The link to Healthy Village is in the post and will take you directly to the right page. It seems to be a small business, so the ordering is not complicated, and if you are like me you miss a shipping total and a confirmation page. But my order arrived shortly and the shipping for my entire order which also had dehydrated vegetables and stevia was around ten dollars.

I have some in my cupboard too, Lisa - although fiber and me are not great pals. Put it this way - a little fiber for me is okay. I did find when I made a smoothie with it - I didn't want to eat for hours, I was so "full". It definitely does do that, so I think it could help folks with weight loss if they tolerate it well. So, if it is good for hyperthyroidism - what about folks with hypothyroidism? I don't know if you have the answer for that, but as I was reading, I began to wonder... Have a nice day, Lisa.

Have you ever seen that commercial for Lipozene...the one that you take to help loose weight? Look at the generic part of the name and you'll notice it says "konjac." Glucomannan is konjac root. It also comes in capsule form and you take it about twenty minutes prior to your meal to inhibit the way the fat is absorbed and to slow down sugar placement in the blood. We learned about it from Dr. Mark Hyman who writes the "UltraMetabolism" and "Blood Sugar Solution" series. Just an FYI.
On a side note, going to try the cantaloupe smoothie today. Thanks!

I recently bought my first powder and am out searching for recipes. Glad I found your blog. I bought an 8 oz container from Puritan's Pride for $8.95, free shipping.

Is this safe to mix in yogurt then eat right away !!! ? Will it expanded in my throat with the yogurt ?

Rose, xanthan gum thickens quickly, so that shouldn't be a problem. We use just a tiny bit anyway.

With bistroMD you can trust that you will not only get gourmet meals, but that every meal and every day in bistroMD's weight loss programs is balanced to bistroMD's specific nutritional platform to promote healthy diets.

STEP 1 - Choose one of the weight loss plans for 5 or 7 days of meals.
STEP 2 - Review your menu in advance and pick the meals you desire for each day and week.
STEP 3 - Order your weight loss plan.
STEP 4 - Your meals are sent to your doorstep.