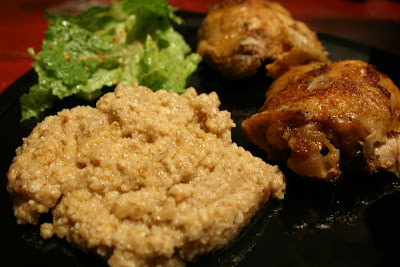 I am still in the process of getting my house back together, and still fighting with the powers that be. One of these days, this all will be over. Between insurance agents who never phone back and mortgage bankers who hold your money hostage, life is nuts! We are all moved back in, just taking some time to get everything put away and organized. The Pod leaves tomorrow, and we will look good as new again! Hopefully, that means I will have more time again for some recipe development.

The hubby was out of the home broadcasting a basketball game this evening, so I decided to try an experiment I know would draw protests from him. My youngest, who is now doing the SCD diet for his tummy issues, was missing grits. He loves them with cheese. Dad hates them. Won't even try something that dares to be called by such an unappetizing name. But when Dad is away...

When I found this interesting take on the old Southern favorite over at Paleo Comfort Foods I hoped my baby son would like them. Paleo grits--not hominy or corn grits at all, but riced cauliflower and almond meal. I tried the recipe almost exactly as written. I did add a bit of olive oil to my pan, and I used the chicken broth from the crockpot Smoked Paprika Chicken. Since that had several lovely spices, the "grits" may have been a tad bit more flavorful than the original recipe. I thought they were nice--very satisfying and the mouthfeel was that of carbs, not cauliflower. The boy, on the other hand, thought they were just "OK" for his tastes. Since he is accustomed to cheesey grits, I tried adding cheese to his portion. That was really good, but still, he did not finish his. The final verdict from the boy is that they were good enough as a side dish, but in no way his beloved grits. Ah, to each his own.

I hesitated to share the recipe and Paleo Grits attempt, since the outcome was rather lackluster. But it might be exactly what would appeal to you. If memory serves, I think the recipe originators favored these with shrimp. That sounds interesting, I still might try a version of our Cheesy Grits Casserole, a favorite at Thanksgiving among our clan. John never eats that either! Let me know if you like this if you give it a try--or if you have made them before, let me know how you liked them.

The Smoked Paprika Chicken really doesn't need a formal recipe. I just sprinkled chicken thighs with smoked paprika, cumin, lemon pepper and salt. Yum. I let it cook all night, served some up for hubby's work lunch, then chilled the rest for dinner.

I have some really interesting recipes I want to try soon. Maybe after the last closet is cleaned out and the last picture is re-hung, I will have time to get to the grocery store for the goodies!

Email ThisBlogThis!Share to TwitterShare to FacebookShare to Pinterest
Labels: chicken, crockpot, side dish