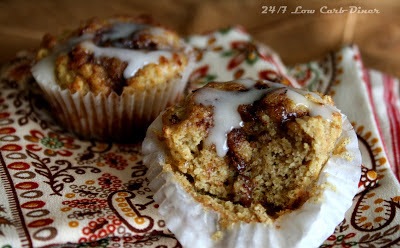 Cinnamon is everywhere this time of  year. I love it. Today, I made some amazingly yummy muffins using golden flax and coconut flour as the base.  The texture is great. The flavors are amazing. I wanted something really bursting with cinnamon taste. I had cinnamon oil from making those old fashioned cinnamon toothpicks. Remember those? Good to ward off snack attacks. I also use it to flavor tea. But here I am highjacking my original post, so now back to the muffins.

I decided to boost the flavor in the cinnamon butter mixture I was planning to ribbon through the vanilla batter. Knowing my grocery store cinnamon just wasn't going to get me to absolute cinnamon nirvana, I added a few drops--OK, like seven drops to the butter and sweetener. Oh yeah! that is the kind of cinnamon I am talking about to rival all the fall candles I have around the house. Have I mentioned I love fall?

I  made these muffins in my Babycakes Cupcake maker. Mine took only 7 minutes to bake. I haven't tried them in a standard oven, so use your mad cooking skills to know when yours are perfectly baked.

In a medium bowl, mix the flax meal, coconut flour, sweetener, baking powder, cinnamon, and salt. In a separate small bowl, bet the eggs. Stir in the water, oil and vanilla. Add more water to thin the batter if necessary, as coconut flour can vary.  The mixture should be thick, but spoonable, not pourable.

Line mini muffin cups with papers. Spoon the batter into the cups. Pour about 1/2 a teaspoon of the cinnamon topping over each muffins. Use the spoon to make X shaped "cuts" into the batter to allow the topping to settle inside. Bake the muffins in a cupcake appliance or at 325 degrees until the tops are lightly browned and the middles are set. Remove and cool while preparing the glaze.

Fill a very small bowl with powdered sweetener. Stir in melted butter. Thin with water to the stage where the glaze will pour from a spoon. Drizzle the glaze over the muffins. Makes 12 small muffins (my Babycakes machine makes muffins which are larger than traditional mini- muffins, so you may get more.)

You can add nuts to these if you like. Also, I used a favorite flavor--Vanilla Butter Nut flavoring. I think it makes my baked goods taste like pound cake. Not all natural though, so you may prefer straight vanilla. Use whatever sweeteners you like best. I am pretty sure most any low carb sweetener, even liquids will do in the batter.  I happened to have Swerve for the granulated. For the topping and glaze, it is probably more important for texture to use the bulkier sweeteners called for.

These are a bit more trouble than most of my muffins, but they are so worth it!

Get more great recipes at the Low Carbing Among Friends Facebook Page:               https://www.facebook.com/LowCarbingAmongFriends
Order our books at: http://amongfriends.us/24-7-LCD.php
Love the recipes I share on this blog? My ebook helps you plan and prep to stay healthy 24/7.   http://www.247lowcarbdiner.com

Email ThisBlogThis!Share to TwitterShare to FacebookShare to Pinterest
Labels: muffins

OMG I must find cinnamon oil STAT These made my mouth water to the max! Hopefully I can find it here so I don't have to wait for shipping. :P YUM!

Good thing I read the comment from IVO, because I scanned the recipe quickly and thought it said coconut oil for the filling instead of cinnamon oil! That's a first, I've never heard of it, I hope it's easy to find in the stores.
Sandi ☺

Can you use only stevia in this recipe? We can't use swerve or similar sweeteners right now only stevia. How much would you need to use?

Yum! Can't wait to try these! I think I'll make them for my hubby Saturday morning! I don't have the cinnamon oil but I'm going to try it anyway.

these look soo amazing! I need to finish my baked goods first before I CAN jump on these, but def. making these!!! :)

I made these last night and they are amazing. You wouldn't know they were LC. They turned out tender and moist with a nice crumb. I find the cooling effect of the erythritol less pronounced today than it was last night, so that's a bonus. I didn't have the cinnamon oil, but can imagine they'd be even yummier with it. I baked in the oven for 12 mins in mini muffin tins and got 16 out of the recipe, although I think I will fill them a little less full next time as the butter from the topping ran all over the bottom of my oven causing a smoky mess! Still, worth the mess 100%. This is by far the most successful coconut flour recipe I've tried. Thanks so much!

OMG these look lovely, Lisa! Just printed the recipe to maybe try during the holidays.

These look so good! I'm going to use coconut oil as the mild oil.

They were amazing! I'm making more this weekend, a batch for me and a batch for my father who is also low carbing and thought they were great - and he's very fussy!

Thanks so much for sharing your recipes, it has made my weight loss journey so much easier (although I still have a long way to go!) I'm blessed to have found your site!

Wow these look so good! I'm wondering if I can use a Splenda or Sweet n' Low sweetener alternative? Also, where did you find the cinnamon oil? I'm hoping it will be at Trader Joes or Fred Meyer as I'm grocery shopping this upcoming week. Thanks for the recipe!

I made these the day after you posted the recipe because they sounded so yummy! They were awesome, even without the cinnamon oil. They were such a treat after not having any kind of cake type dessert since going low carb a year ago!
Thanks for this great recipe!

I've now made these twice ...doubling the batch the second time! They keep really well but I'm going to freeze some this time. They're my go to quick breakfast when I have to grab and get out the door! I also added a few chopped pecans and put some of the filling in the middle ...YUM!! Great recipe! THANKS!

Delicious! I made these in the Pampered Chef mini muffin pan, and it filled all 24 spots. Didn't use cinnamon oil, and they were perfect as is. I think they would have been too spicy with the Cin. oil, but I was using Saigon cinnamon (pretty strong), not your typical grocery store brand. Has anyone tried making these in a regular muffin tin? We loved these, but felt like we had to eat 4-5 of them to feel like we've had a muffin. Great recipe! Definitely a keeper. I'm making them as part of a low-carb Christmas brunch (along with sausage quiche with almond flour crust and fresh berries/cream. Yum!

Delicious! Didn't have cinnamon oil and I just ran out of Swerve, so I used xylitol... turned out great. My favorite guilty indulgence no longer has to be *guilty*! :) :) Thank you!!

To Anonymous above my post- yes, I did actually make them in regular muffin tins, as I don't have a mini muffin pan. I got 8, and could have filled them a little less full to get even more, they really puffed up. I also was using the Saigon cinnamon- for the first time! Amazing!

How long do you cook it??

You can usually find cinnamon oil in the drug stores too.

Do you think I could substitute almond flour for flax? I do not care for lax texture/taste in foods. Tx

Does anyone know what the total carb count is? It only list net carbs

I also got 8 regular muffins and I baked them for 22 minutes. Your mileage may vary....

I just made these today after seeing the post on Facebook .... OMG!!! These are so yummy and guilt free:) I don't have a baby cakes maker so I baked about 20 min in my stone muffin pan so it made 9 muffins. I used cocanut oil for the mild oil and it was tasty. i had my hubby run out and get cinnimon oil since it was the only thing I did not have on hand. I knew it would make it more flavorful:) Thanks for posting, it made our raining Saturday:)

Using buzz words such as "flax seed" does not a healthy food make. This recipe is like faux healthy, for people who don't want to just go all the way and admit these sugary, buttery sweets aren't helping them on the road to achieve their dream bodies and overcome sugar addictions that so many women suffer from.

This recipe uses coconut flour. I have two questions: 1) Can you taste the coconut flavor in the muffins? I'm not fond of coconut flavor in baked goods, and 2) Do you think it would work if I substituted almond flour for the coconut? Or perhaps some other nut flour, such as cashew or hazelnut flour?
Thanks! These sound delicious.

AMAZING! My kids gobbled them up and said mom are you sure you can eat these they are too good to be healthy! Thanks to you my nutritional plan is not So hard to stick to:)

Stephanie, what did you use in place of the cinn oil? Thanks

There is no sugar. Whatcha talking about?

is cinnamon oil what you use for candy making? I bought the tiny bottle in Michael's but not quite sure I got the right thing

Just made these this morning! So delicious! I felt naughty eating them and I didnt even have to! Thanks for the recipe!

It's been said that any bettor needs to look at this,

Watch this now or quit placing bets on sports...