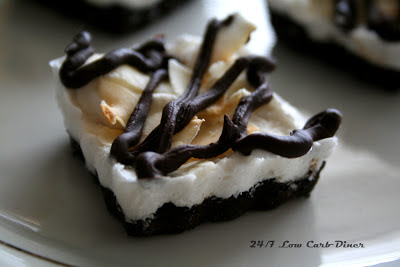 It is the time of year for special desserts and fancy dinners. Today I hit upon an easy and really pretty tasting party sized dessert. I love the flavors of Almond Joy candy bars. These are close, but full of good for you ingredients. They are pretty too, but the chocolate and coconut combo is just so good.

I baked mine in a specialty pan--one where the bases are separate pieces allowing you to poke the desserts out with your fingers from the base of the pan.  This doesn't work for wet recipes, but is great when sticking might be  a problem.  The crust does have a tendency to stick, so silicone would be your best bet if you don't have a specialty pan like mine. 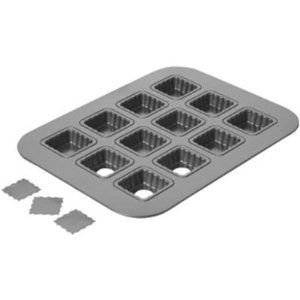 Filling:
14 ounce can of full fat coconut milk, chilled and not shaken
10 drops of liquid stevia or sweetener to taste

Prepare the crust first. In a microwave safe bowl, melt chocolate and coconut oil. Stir in the powdered sweetener and salt. Combine with the almond flour. Press this mixture into 12 cupcake bases or a mini tart pan which has been oiled. Bake at 325 degrees for 8 minutes. Remove from oven and let cool. Toast the shredded coconut in the residual heat of the oven, keeping a close eye on it to prevent burning. Set aside.

Remove the solid portion of the coconut milk from the can. Discard the remaining liquid or use for another recipe. Whip the coconut with sweetener for 2 minutes or more until the mixture is thick and fluffy. (Some brands are nearly ready immediately.) Spoon this mixture into the cooled crusts. Divide the toasted coconut among  the pies.

Melt the remaining chocolate square and coconut oil in the microwave oven until liquified. Add powdered sweetener to taste. For a less dark flavor, stir in a tablespoon of heavy cream. Pour this mixture into a  plastic sandwich bag. Snip the end and pipe the chocolate over the tops of the pies.

Place the pies into the freezer to firm up very well before removing from the pan. This will help them retain their shape. They are best eaten chilled, however, not frozen. Once out of the pan, the pies will hold their shape in normal temperatures.

Trying to multi-task this morning, I did  let my crust bake a little too long. Be careful with those, since the dark brown color prevents the eye from detecting browned edges. The crust will still feel a little springy to the touch when warm. (Good thing we like our cookies a little on the well done side.)

I have been busy with my few days off this week getting some work done for the January Diner News. It is the kind of work my guys appreciate though. This week, I have prepped a 10 pound pork tenderloin and 10 pounds of hamburger too. The Diner News is going to have a Deli theme, and I am trying out some ways to keep us supplied with deli meats and salads. Yummy experimenting for certain. In just a day or two, I will be busy with our Christmas menus. I host Christmas Eve at my house. It is a fancy sit down. This year we are having turkey and ham. On Christmas day,  I think I am bringing Alfredo Sauce with Dreamfields pasta and cheesecake. What are your big plans?

Lisa, is there any way that you could put the carb counts on your recipes? It is really important for me to keep my carbs under a certain level, and I know this would help tremendously. Love your website and love the 24/7 Newsletters. Take care and happy holidays,

I love almond joys. What are the coconut brands that work best for this? Love your newsletter and ecook book.
thanx
rose54

Hi, these look amazingly delicious. Do you know what the net carb count is on them? Thanks!

The meaning of this is that you actually get rid of fat by eating coconut fats (in addition to coconut milk, coconut cream and coconut oil).

These 3 studies from big medicinal magazines are sure to turn the traditional nutrition world around!