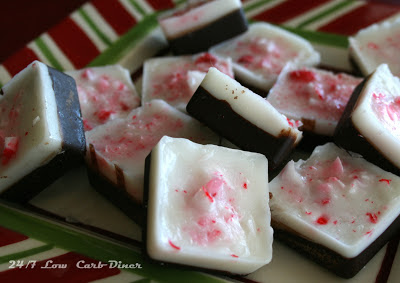 So I wanted to make  a peppermint bark with coconut oil like I did last year. (Dec 11 Diner News) This year I had a mishap with my pan. I set my foil lined toaster oven pan into the freezer to chill the chocolate layer, but it somehow got tilted after the door closed. So much for  my plans. Luckily, the coconut oil peeled off and remelted easily. But by that time, I decided to pour it into these small silicon ice cube trays I  picked up at Goodwill. Now I have perfect little squares of minty goodness--no barking about it.

I made just half a  recipe today. I also used Swerve instead of erythritol and stevia. If you want to do that, just measure the Swerve the same as the erythritol in the recipe and leave out the stevia. For those of you who don't like the cooling effect of erythritol, this is the perfect recipe. With all the mint in there anyway, you expect that coolness. Believe me these are cool!--and yummy.

Prepare chocolate layer by melting coconut oil in a small bowl. Stir in cocoa powder, sweeteners
and vanilla until smooth. Pour this mixture into a foil lined 8” x 8” or larger dish. Chill until firm.

Prepare peppermint layer by melting the coconut oil. Stir in sweeteners and peppermint
extract until smooth. Pour this mixture over the chocolate layer. Sprinkle with crushed candies and chill until firm. If using a smaller dish with a thicker candy, cut into squares, if using a larger dish, break into chunks by hand as with traditional bark.

Super rich, minty and delicious. I used a refined coconut oil, so these don't taste like coconut, just mint! If you live in a warm climate, be sure to chill them well before serving, as coconut oil does become liquid again  around 76-77 degrees.  For a party, I would simply serve them on a chilled platter.

Recipes like this are one reason you might want to consider ordering the back issues of the Diner News. So  much good stuff that isn't here on the blog! order here.

I have my last holiday party tonight, and my oldest son is coming in from  Arkansas. It will be good to have the whole bunch together again.

Posted by Lisa Marshall at 2:53 PM

i wanted to say, i got both volumes of your cookbook a few weeks ago...they are fantastic!! this site has changed my life! thank you so much!

Kim what a wonderful Christmas gift you just gave me!

This looks wonderful and pretty easy to make! I think I will give it a try! I have NO experience with erythritol, does it cause the unpleasant gastric side effects like the other sugar alcohols do? If so, can it be replaced with liquid sucralose instead? Thanks :)

Does the stevia glycerite cut the coolness of the Erythritol. I have tried making some desserts for guests at our weekly get togethers at church with Z-sweet and the coolness effect was not well received. :( I'm back to splenda for most sweets now, but if there is a healthier alternative that does not offer that coolness, that would be awesome! Thanks so much!

Do you think this would work with cocoa butter instead of coconut oil? Thanks :)

I really had a great time stopping by your site, it gives me a lot of information. You can also visit my site, thank you!