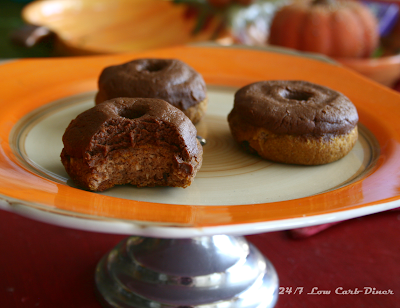 I made a delicious pumpkin chocolate chip cake a few years ago for a recipe contest featuring pumpkins. I didn't win, but i did fall in love with the flavor combination!  In fact, this post is all about a combination that works. I made these Pumpkin Coconut Mini Doughnuts in October for the Diner News. I opted to add the cocoa nibs and they were very nice. I popped a few into the freezer to save for later. This is later. It sure pays to stock the freezer!

For the November News, I found this recipe from Chocolate Covered Katie. The concept fascinated me. A no bake chocolate pumpkin pie filling. I had to try it out, even if it was too late to get photographs in the News. It is very interesting. My version was much darker than Katie's photos.    I think perhaps she used milk chocolate chips and mine were darker. I used a combo of sugarfree chocolate chips and regular semi sweet. I know my fudgy version has too many carbs, but it was an experiment, and the serving size is pretty small. (I get tummy trouble from maltitol and didn't have any better chips on hand) I plan to try it again using unsweetened chocolate and my own sweeteners. If you are inspired, you might beat me to that, so let me know if it works. Since I tried it without an actual pie crust made, I still have some of the mixture in the fridge. From the very start, I thought it would make a terrific, stable frosting that didn't rely too much on butter or cream cheese. That it does! I love it as a dense frosting. You may want to half the recipe if you are just using it as a frosting, though.  Haven't figured the carbs. Hoping to get a new version of a recipe/nutritional program for my birthday. Missing my Mastercook since my laptop was stolen. Yes, that is still smarting.

To me, the chocolate is stronger than the pumpkin in the frosting/filling. But paired with the pumpkin doughnuts, the combo is absolutely perfect. Try it on a pumpkin muffin to make it more like a cupcake. Use it as a filling for a Ginger Cakes. Heck, it would be very tasty spread on an Almond Thin.

This is the recipe for the doughnuts. I like the mini ones made in my doughnut appliance. They are so cheap, go ahead and buy one. Much better than the pan I bought. 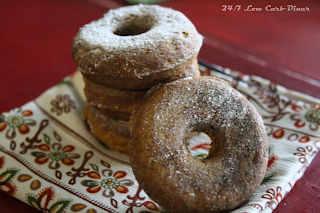 Break eggs into a medium bowl. Whisk well. Stir in the pumpkin, coconut oil, stevia and vanilla. If the coconut oil solidifies, warm the mixture in the microwave for 20-30 seconds. Add coconut flour slowly, stirring well to incorporate. Add in the coconut, spice blend and soda.

Options:
· Add 2 tbsp cocoa nibs to the batter.
· Instead of powdered sweetener, brush with butter and coat with a mixture of cinnamon and granulated
sweetener 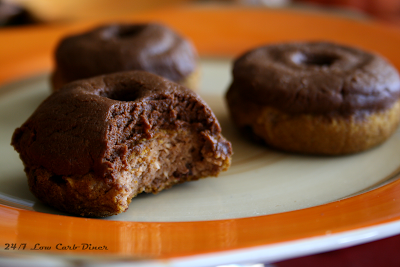 Over low heat, melt chocolate chips. In a medium bowl, combine melted chocolate, pumpkin puree, cocoa powder, vanilla, stevia and salt. Combine all the ingredients and adjust for sweetness.  Chill, then spoon onto doughnuts or muffins. Smooth with the back of a spoon. (or your fingers) Use a clean pen to create the hole in the frosting, or just leave it capped.

These have wonderful texture. The thick rich frosting paired with the cakey doughnut is delightful and rich. They feel like a cheat. Now, remember, both of these recipes were featured in the 24/7 Low Carb Diner News. See what you are missing if you don't subscribe? Just 6 bucks a year. Each issue is generally 8 pages of recipes and tips you can use. Order here. 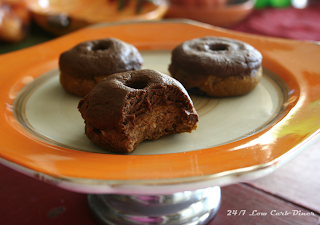 So glad I got to show of my latest find from the thrift store. Isn't this little pedestal serving plate too cute? Good score for $1.50. Somehow a pedestal makes everything more special--even if it did come from the freezer!

What size are the mini donuts? I have a donut pan for six. Would I have to adjust baking time?

These are about the size of the hostess gems. This makes quite a few. My appliance is much faster than the oven, so I would guess more like 15 minutes in the oven.

How many carbs per donut?

Can't wait to try the donut and fudgey frosting! Love that they both use pumpkin!! Sounds absolutely incredible. Thank you, Lisa!

Would they bake okay in a "non-donut" pan :) Like a loaf pan or cake pan?

What is the carb count on these? Someone already asked, but didn't receive an answer.

I didn't run the stats on these, but they should be very similar to the loaf variety, only more servings. Check out that recipe. http://247lowcarbdiner.blogspot.com/2014/10/pumpkin-fudge-mini-loaf.html

What is the nutritional info on these? I'm on weight watchers so need to know the points value.

You have such great recipes!.

The meaning of this is that you literally get rid of fat by eating Coconut Fats (including coconut milk, coconut cream and coconut oil).

These 3 studies from big medical journals are sure to turn the conventional nutrition world around!

Did you know that you can shorten your links with AdFly and get cash for every visit to your shortened links.