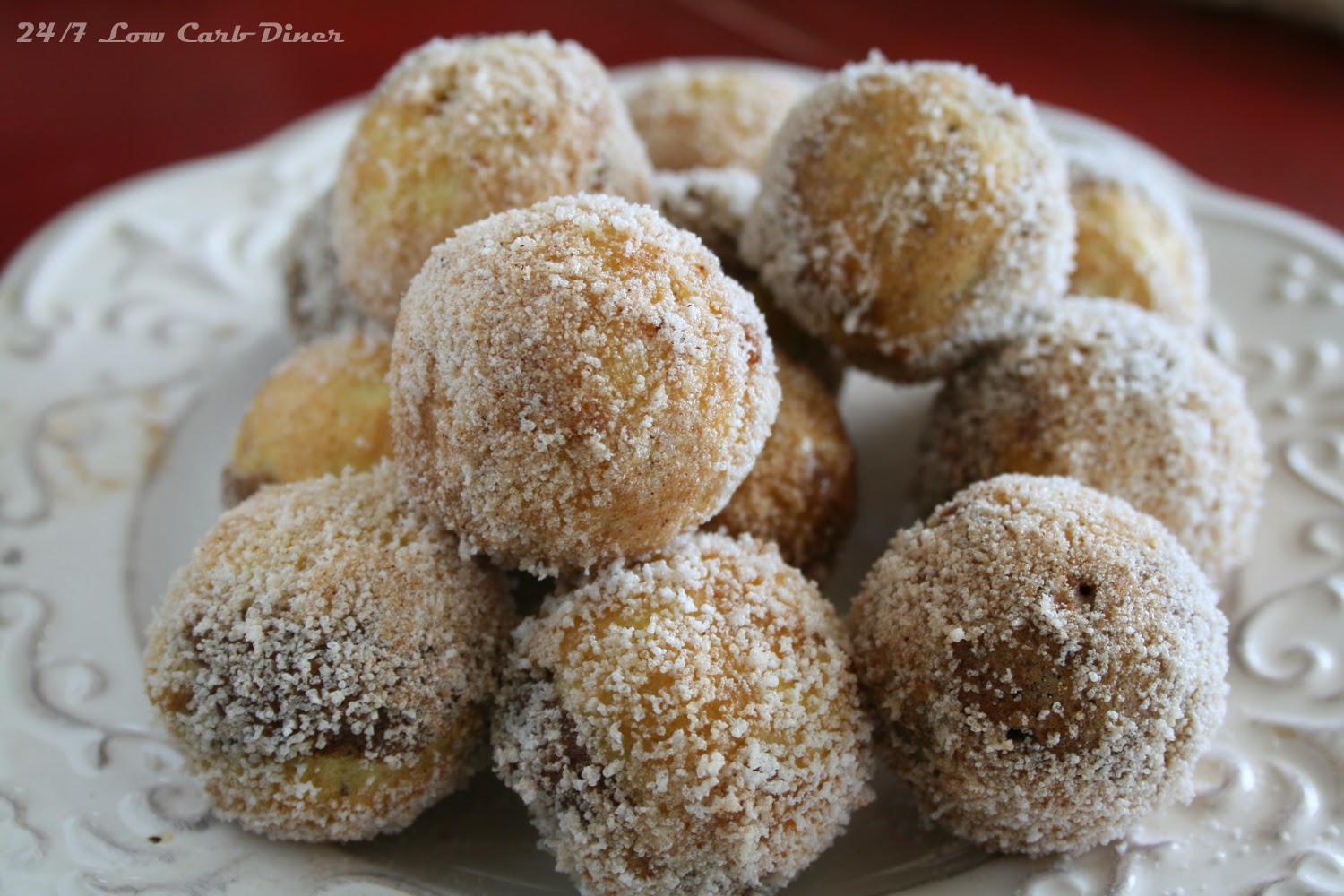 I started out today to make some cinnamon minute muffins. Somewhere along the way. my ideas jumped plan over to my cake pop maker. After all, it is spring break for me and I have a little more time to play in the kitchen. I still have a huge to do list for this week, but I took some time to make these sweet little breakfast treats. Hubby liked them and took a bunch to work. They are pretty tasty.

In a small bowl, mix flax meal, almond flour, coconut flour and baking powder. In another bowl, lightly beat the eggs. Stir in the oil, vanilla and sweetener. Combine the wet and dry ingredients. Remove half the batter to a separate bowl and stir in 1 tbsp cinnamon and the water.

Cake pops: Pre-heat the cake pop appliance. Fill the wells, alternating between vanilla batter and cinnamon batter. Bake for 4-5 minutes and remove to cool. Repeat with all the batter

Mini Muffins: Coat the muffin tin or cups with oil. Do not use papers.  Fill muffin cups 3/4 full alternating vanilla and cinnamon batters. Mix with a toothpick if you like. Bake at 350 until set in the center, approximately 15 minutes. Release the muffins from the pans.

Coating: Melt the butter in a ramekin. In a shallow bowl, combine the granulated sweetener and 1 tsp cinnamon. Dip each ball or mini muffin in butter and then roll in the cinnamon mixture. 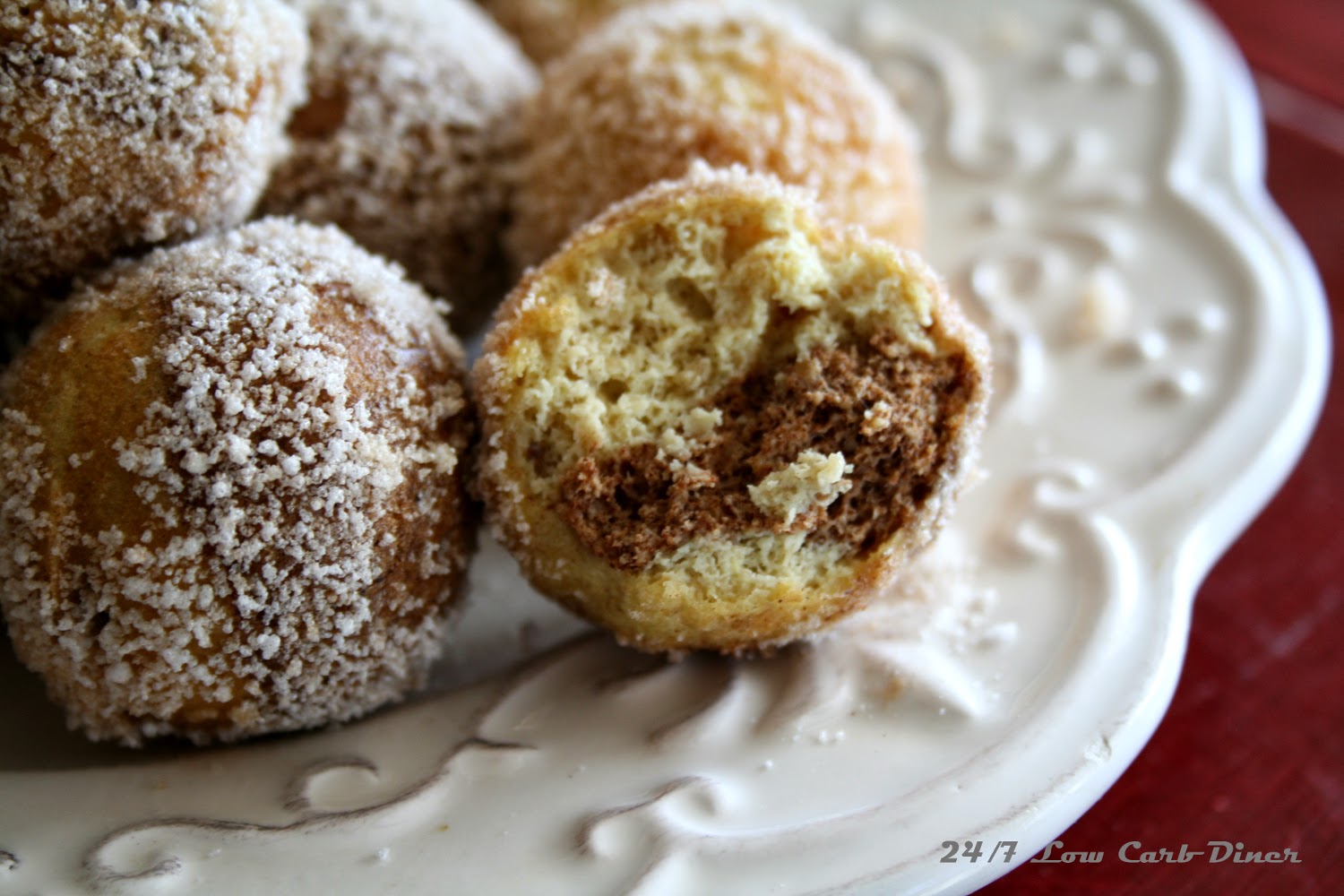 Given that this is based on a Minute Muffin recipe, these might work well in the microwave oven if you have mini muffin silicone cups. Didn't try it, but it might work. You may need to add a bit more granulated sweetener when rolling. Happy Spring!

(I don’t know how to catch your attention but hopefully you could spare me a minute to read this message.)

My name is Freddy. Surfing on the net I found your blog and noticed you have a great number of tasty recipes there, that is why I am contacting you. I wonder if you would like join our website www.mytaste.com and receive more visitors to your blog through making your recipes available to a greater number of internet users.

Mytaste.com has been launched recently and from the first day it has gained popularity among food lovers. Today the site can be found in 45 countries, where we deliver thousands of visitors to food blogs daily. Some Top Food Blogs on our pages receive more than 20 thousands unique visitors a week.

Recently and to improve the user experience and develop their loyalty we added social features that allow our users to create cookbooks, save recipes and follow other users. This means that when a recipe from your blog is saved, the user will always have the opportunity of visiting your blog again.

So, if this sounds like a good plan to you, please visit our website & add your blog through the Top Food Blogs section here: www.mytaste.com/add-your-food-blog There you will find all the instructions you need to follow to become a part of our bloggers family.

Hopefully your food blog will be up there in the top!
If you have any questions please don’t hesitate to contact us at info@mytaste.com

Can't wait to try these! They make me think of donut holes! MMMmmm...

What is the serving size for the 2.5g of carbs?

Looks like will be a delicious recipe to enjoy with family. Lots of thank for sharing the blog and recipe too.
Personal Chef To Go

Where did the 3 tbsp of water go? Can't seem to find them in the ingredients list.

Of course I mean I can't find them in the recipe! :$

It is so delicious.

Really awesome recipe to enjoy and I can't wait to try this to cooking at early weekend.

I too was wondering what you do with the water. Wash your fingers? I'd assume you add it to wet ingredients, but who knows. I gather she's not monitoring Comments.

Lisa - I can't wait to try these! Reading your recipe inspired me to go buy a cake pop maker, and now I'm hooked!

Remove half the batter to a separate bowl and stir in 1 tbsp cinnamon and the water.

We make and eat these a lot. In fact we started making these in mini bundt pans and when dipped in the coating it is like eating a cake donut. We LOVE these!!! We have added using coconut mango balsamic vinegar and blood orange oil to give them an even different flavor. Absolutely one of our favorites.

What in interesting flavor combo! Kudos to you!