Pavlova --Beautiful Dessert Light as Air; and Marshmallow fun too! 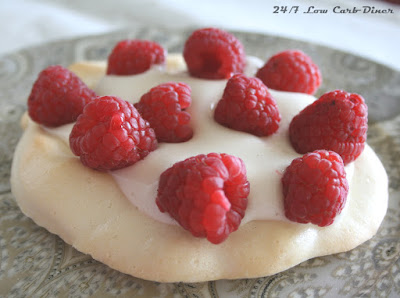 This dessert is lighter than air--much like the ballerina it is named for. Light in looks, texture and calories. Woohoo. It looks far more complicated than it is...as long as the humidity is not too high. The base is a meringue, the topping a marshmallow cream crowned with fresh berries.

This has always been on my to do list. This month, the Diner News is featuring recipes that are light. Low in calories as well as low in carbs. This is a hit. The fresh berries of summer are right at home. I chose to make individual desserts, but the dramatic cake size original Pavlova is a beauty. The original recipes call for cornstarch to create a marshmallow texture inside the lightly crisped edges. I didn't get that--mine are more meringue all the way through. So, instead of the typical whipped cream (not so light) or lemon curd (also not so light) I made a marshmallow cream for the topping. More on that below.

Go ahead and give these meringue bases a try. They are not hard at all. They peeled off the parchment with just a little coaxing. Just be careful and don't over bake. I left 4 in the oven overnight and they were still perfect the next day. You can make these ahead of time for special occasions I would think. Since then I have stored 2 in a plastic bag and they seem fine as well. 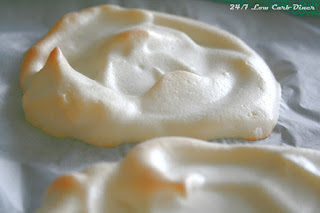 Preheat oven to 250 degrees. In a glass bowl, add egg whites, sweetener, vanilla and cream of tartar. Use a hand mixer or stand mixer to beat egg whites until they are glossy and form small peaks. Do not whip until stiff. Line a baking sheet with parchment. Make 6 circles of the whipped mixture. Bake for 18 minutes. Turn oven temperature down to 200 degrees and bake an additional 20 minutes. Turn oven off and let cool with door closed.

Loosen the puffs from the parchment and place on a dessert plate. Top with sweetened berries and  whipped cream. For lower calories, whip up a batch of Diner Style Marshmallow Cream.

6 servings:  28 calories each with raspberries and marshmallow cream-- 1 net carb 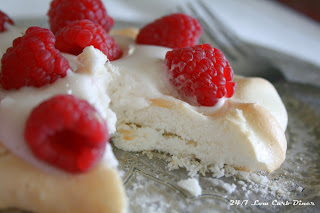 I first played around with marshmallow recipes years ago, trying to recreate Smores for a camping trip back in 2009. I followed the recipe from Low Carb Luxury. This is pretty much the same recipe. I used my organic gelatin and added my own capella flavor drops--Cookies and Cream this time. Vanilla will do fine. I will include my instructions here, although the credit for that really is all theirs. I found that I can leave out the coconut flour dusting they call for. These did not stick on any of the surfaces I tested. You can make square marshmallows that are close to a traditional, just none of the stickiness.

One thing about the cream. It is very similar in consistency to marshmallow cream--but only for a short window of time. As it cools, the properties of the gelatin take over. My jar ended up much more like a spongy marshmallow. Stirring it just creates a lumpy mess. The secret is to ever so gently reheat it back to that creamy stage. If you want to dip fruit or spread the cream on the Pavlovas, be sure to do it before it sets, or reheat it gently. I experimented with it 4 times. Each time you reheat you will lose some of the fluffy volume, but the cream is still good for dipping. And that is what I love this for--dipping strawberries. You get a nice, almost white coating with almost no calories at all! Just dip a dry berry and set it on a plate to cool and firm up. That makes it even better than marshmallow cream. It actually firms up without being gooey. Pretty too! I am not sure if they would take the summer heat, so keep these chilled if you make them for Independence Day. 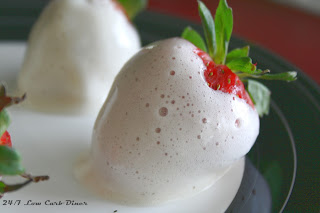 I only needed about 1/4 of the recipe for the Pavlovas, so I also made a jar of "cream" and a batch of 8 marshmallows. The marshmallows are fine plain, but I decided to add some colored Natvia to make them special for the upcoming holiday. Two ways to do this one too. The sweetener will easily cling to the sides of the marshmallow, or you can dip a marshmallow into the cream and sprinkle the sweetener on with your fingers. 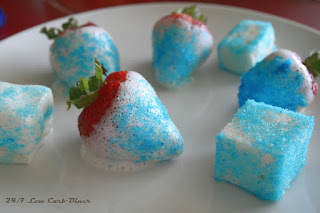 In a small sauce pan, add 1/4 cup cool water. Slowly sprinkle the gelatin over the surface of the water. Let the gelatin set up for 2-3 minutes. When it a almost a solid mass, add 3/4 cup boiling water. Stir until gelatin is dissolved. Stir in sweetener, and flavorings. Let cool.
In a glass bowl, beat egg whites with an electric mixer until soft peaks form. (Not dry, stiff peaks) Slowly drizzle the gelatin syrup into the egg whites while beating. When it is all incorporated, use the mixture immediately as a marshmallow cream. It will set up quickly, even at room temperature. If it becomes clumpy, just reheat it slightly.
For traditional marshmallows, pour the mixture into a dish sprinkled with a pinch of coconut flour. Chill. Cut into squares. Drizzle with sugarfree chocolate sauce or colored sweetener  for a fun treat. 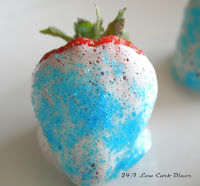 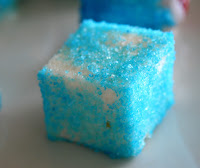 Now back to the Pavlovas. The second day, I made strawberry topped desserts. I simply mashed some ripe berries and added some sliced berries in too. Both the base and the marshmallow toppings are so sweet, I really didn't need to add any sweetener to the berries. You could top these so many different ways. It is hard to believe you can have this gorgeous dessert for just 28 calories and 1 carb. Seriously. 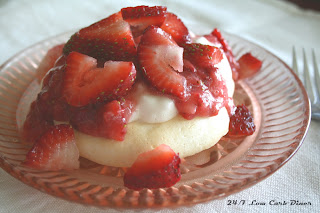 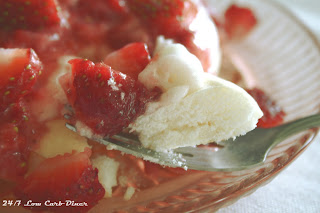 Tough to beat that for a fine dessert! No guilt. That is what this month at the Diner is all about. Delicious food that is low carb, but also low fat, low calorie and full of taste. Here are a few previews from the July issue.If you aren't s subscriber, go here to get your Diner News. Just $6 a year for an e-subscription delivered every month.


It may be hard to believe, but all these recipes are very low calorie as well as low carb. In fact, the Diner News for July has even more recipes than pictured here. These are low fat, not that I am a fat phobe, but I need to restrict some of those excess calories. Lots of us older girls do, I hear.

I sadly turned in my keys to the school building today, so I am officially done. I will have more time here as promised, and I want to get busy again over at our book Facebook site.

Looks fantastic! Your fingers got away with you when you were typing the post title though :-)

Thanks Kate-- I am the worst editor of my own typing!

Did you know you can create short links with Shortest and receive money for every click on your shortened urls.