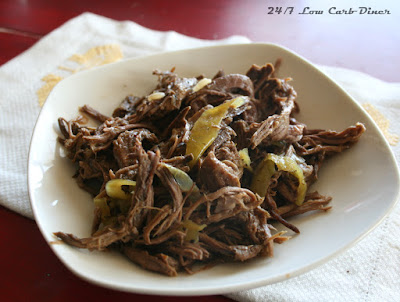 My favorite great aunt was from Mississippi. She was also a phenomenal cook...and she always smelled good. Funny the things you remember from your childhood. Her hugs were soft. She had a big fur coat. She made the world's best chocolate cake. And she loved me and my sis like we were her own grandkids. She never had children, so we were hers. Every little girl could do well with an extra pair of loving grandparents. That was my Aunt Gladis...and Uncle Worrall too.

Some have scoffed at this internet sensation of a recipe, declaring the ingredients to be somehow "unlikely southern." Granted not too many cooks from the old days of southern charms had pepperoncini peppers in their pantry. But, I have to say, despite what some seem to think, the South is still alive, and great southern cooks are able to innovate and take advantage of modern ingredients. I do get a little tired of the attitude that nothing matters in the U.S. but the coasts. But I will spare you all my soap box there. Afterall, some of you aren't even from North America, and here I am whining.

This is a tried and true recipe, popular for several years now. Even foodie snobs seem to like it. Thanks ladies, for a great recipe. If you want the history on the recipe, here it is from the NY Times. The original relies on packaged gravy and ranch dressing mixes. I opted for a less processed version and upped the peppers a bit too. I also left out the stick of butter: not because I hate fat, but because I am too cheap! I just couldn't figure out what it was going to do since I wasn't going to try to make a thick gravy. What I was going for was the flavor of the peppers with the beef.  I used sliced peppers rather than whole, so we could get the flavor in every bite with no effort on our part.  Maybe I shouldn't even call this the Mississippi Roast, having tinkered with the recipe so much.  I should call it my Mississippi's Cousin Roast Beef. If you want it more like the original, add some thickener and butter.

My family really liked this roast, but then, we never met a slow cooker roast we didn't like. It made fantastic leftovers too. It is good at any temperature. I loved the bit of a vinegary bite as part of a salad later in the week. Decidedly, this will be made again and again. And even though she never made this one, I will always think of my dear Aunt.

I featured this recipe in last month's crockpot edition of the Diner News. If you love your crockpot as much as I do, be sure to subscribe for this and other fantastic recipes.

Place roast in the base of the slow cooker. Combine dill, garlic salt,  and onion powder. Sprinkle over the roast. Prepare a double strength beef stock. If using bouillon, just use half the amount of water. If using natural stock, reduce to half volume in a saucepan. Stir in molasses. Pour over the roast. Top with pepperoncini peppers. Cook on low for 7-8 hours.  Let meat rest for 20 minutes before shredding with two forks. 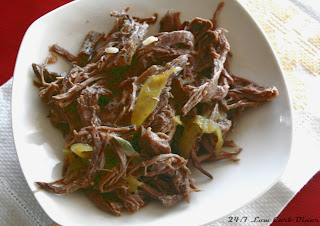 Just goes to show that lots of amazing things come from Mississippi.

I don't have molasses in my pantry, and for such a small amount in this recipe, not sure I'd want to...any substitute? Dark brown sugar? I want to make this...makes me think of Chicago beef!

Just a tiny bit of any sweetener would be fine. I mainly used it to darken up the beef with just a tad of sweet taste. The idea is to replicate the brown gravy mix from the original recipe.

Kitchen Bouquet is used to darken ad flavor gravy. I haven't looked to see what's in it yet.