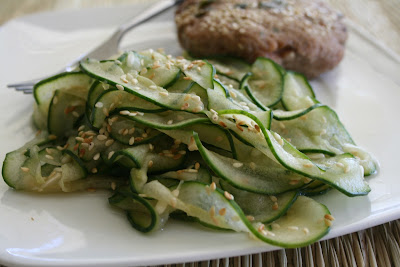 I don't normally love cucumber. I like a little in a salad--but a whole salad of cucumber? Pardon me Larry Boy, but no. This is different. It is packed with flavor. Flavors other than cucumber, that is. It makes a fabulous side dish in this heat. I had planned to put some sesame oil in the dressing too, but forgot that I had loaned my bottle to my mom for some sesame cookies she was experimenting with. But I discovered, that it is not necessary at all. The taste of toasted sesame really comes through when you don't overpower the tastebuds with too many other flavors.

I used my spiral slicer, but it is not required. Just cut thin slices or strips. The ribbony spiral cuts were rather fun to eat though...they can be swirled around a fork like spaghetti. Yes, I am still a kid like that. I let mine marinate a little too long and lost some crunchiness in the heat, but the salad was still great. (I was busy playing with the turkey patties I made to go with this. I will have that recipe tomorrow.)


Slice the cucumber into thin slices. Combine the vinegar, Braggs or soy sauce, onion powder and sweetener. Pour over the cucumber slices and marinate for 20 minutes. Toast the sesame seeds in a dry skillet or toaster oven until lightly browned. Let cool. When ready to serve, drain and discard marinade and sprinkle seeds over the cucumbers.


Served alongside a turkey burger, this makes for a great low cal lunch. Fast and lots of flavor. That is the Diner way!

Posted by Lisa Marshall at 3:11 PM

Email ThisBlogThis!Share to TwitterShare to FacebookShare to Pinterest
Labels: salad, side dish