Sliced Beef for the Best Lunches! 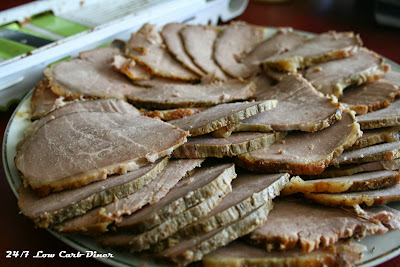 I love roast beef from the deli, but I could never get one  baked at home that sliced well. Turns out I was just buying the wrong cut. Thanks to some comparison shopping deals, I scored a small Bottom Round Rump Roast for a bargain price not too long ago. I plopped in the the crock pot with some (2 tbsp) tamari, a tiny bit (1 tsp) of Worcestershire and half a cup of water. Serious recipe. I was just going to use it as a Triple Play meal. When it came out of the crock, it was still in one chunk. My roasts tend to fall apart. Great eating, but not much like the deli variety. This was different.

I share in case you are as ignorant as I was. See, I am such a bargain shopper, I tend not to try more expensive cuts. This is really a cost savings though if you pay deli prices for sliced beef. Plus, this is so much better. No preservatives and so much real beef flavor. I used a cheap Aldi mandoline to slice the beef, and chilled it before I began slicing. I did some thicker slices and some shaved. It was tender enough to do that, having baked 5 hours in the slow cooker. But not so tender that it shredded itself. Love.

These make the perfect finger food lunch with some cheese slices and pickles. I also made a bunch of small sandwiches for the freezer. I make mine with just meat, cheese and bread. Pictured is Maria's Pannini Bread. Pack a frozen sandwich and it thaws out by lunchtime. Then I add my lettuce and mustard, pickles, tomatoe...whatever.

I have done a little research, and the Eye of Round would be a fine choice too. Now there is certainly no excuse for not having great lunches! 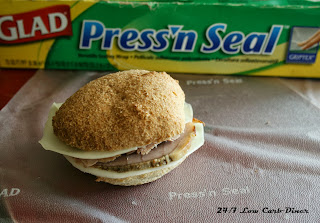 I guess I was as ignorant in the roast beef department! Great idea Lisa! Thanks for posting that.

Sounds great! Was it cooked for 5 hours on the high or low setting?

Low setting for mine. I find my crock pots vary a lot. My older one is my fav. The low setting on my newer model runs much hotter.

Trying this today! My hubby is addicted to the deli carving board roast beef, so this would be a much healthier option. So hoping I have the success Lisa did! :)