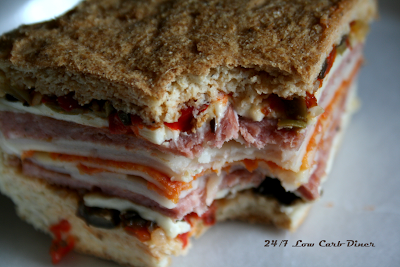 I love, love, love my co-author Maria Emmerich's Toasted Sub and Panini Bread. It is amazing. So much like yeasty, gluten filled bread. If you haven't tried it, you really should. I make it all the time. Maria updated the recipe this summer, and it is brilliant.

This sandwich is my new favorite way to eat it. Not exactly a classic New Orleans Muffaletta, because I like some peppers in my olive salad mix. Pretty and tasty. Add those flavorful ingredients to the best cheeses and deli meats, and you have a very special sandwich. Pretty unheard of among low carbers. 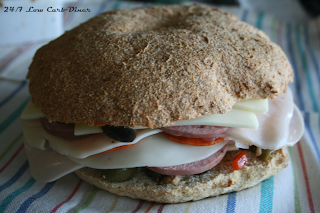 The classic sandwich uses a hollowed out round loaf. I simply baked a recipe of Maria's bread and formed it into a 1 inch thick disk. That in turn bakes into a nice rounded loaf. I doubled the recipe as I usually do--so I think one recipe makes a pretty large loaf. I also made sandwich buns and slider buns. I think you can safely feed 4 with this one loaf, though. Or do as I do, since my hubby turns his nose up to olives--freeze individually wrapped sandwiches. Yes this bread freezes well, as do sandwiches if you assemble them correctly. (That info was in the Sept. Diner News) This photo of the sandwich shows it before it is wrapped and pressed. Pressing and chilling saturates the bread with the wonderful flavors of the olives and peppers. Delish.

I have never had a problem with Maria's recipe It rises well, tastes great and is really easy to make. I have only made the coconut flour version, but Maria has an almond flour recipe too. Some have had problems with certain brands of psyllium husks turning the bread purple. I use the Sprouts brand, and have never had that problem. Maria now suggests weighing the ingredients for accuracy. Have to admit, I just scoop. Never had a problem. Even played around a little bit with the ratio of whole egg to egg whites. Stick by her guidelines, however, because it can be tricky I guess. 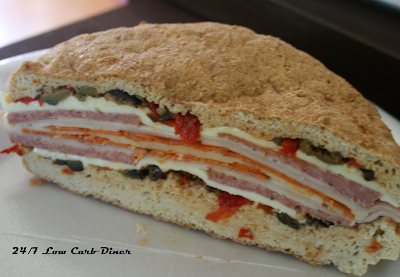 This photo is after pressing.

1. Make the dough as specified in Maria’s recipe. The sandwich pictured  is using the coconut flour version. Mound the dough into a circle on parchment paper and pat it down to about one inch thick. It will rise in the oven. Bake the dough for 45 minutes. Remove from oven and let sit until cool enough to handle.
2. While the bread is baking, make the olive salad. Combine in a bullet blender or chop by hand:
1/4 cup green olives

1/4 cup black olives
1/4 cup roasted red bell peppers
2 tbsp pepperoncini
2 tbsp pepperoncini liquid from the jar
1 tbsp olive oil
1/2 tsp crushed garlic
1/4 tsp dried oregano
3. Use a serrated bread  knife to cut the bread in half   horizontally. Spread the olive mixture on both sides.
4. Layer 8 ounces of deli meats and cheeses of your choosing. I used salami, pepperoni, turkey, smoked gouda and a smoked beef sausage. The choice is yours.
5. Wrap the sandwich tightly in foil and press it with a book, pan, or whatever fits in the fridge. (I used a  casserole dish and set my other fridge items inside it.) Chill at least 8 hours, up to three days. Cut into fourths to serve.

If you try this sandwich and like it, be sure to go over to thank Maria too!

Posted by Lisa Marshall at 8:45 PM

I love Maria's bread too! This looks amazing Lisa!

Can you be more specific about the sprouts brand of psyllium husk powder? I went to sprouts and they had some in the supplement area but not a sprouts brand.
I used a Natural Grocers brand and the bread turned purple and it was gummy.
I want to try it again. Please share some details.

The can says Whole Psyllium Husk. The top says digestive health, then the Sprouts logo, then dietary supplement. In it is a 12 ounce cannister--metal base, cardboard sides, plastic lid. It also says it is steam treated. Maybe that makes a difference? Mine was on an endcap when I bought it, but it was not there this past weekend.

Thanks for the reply. :)
Do you grind it yourself into powder or use it as is?