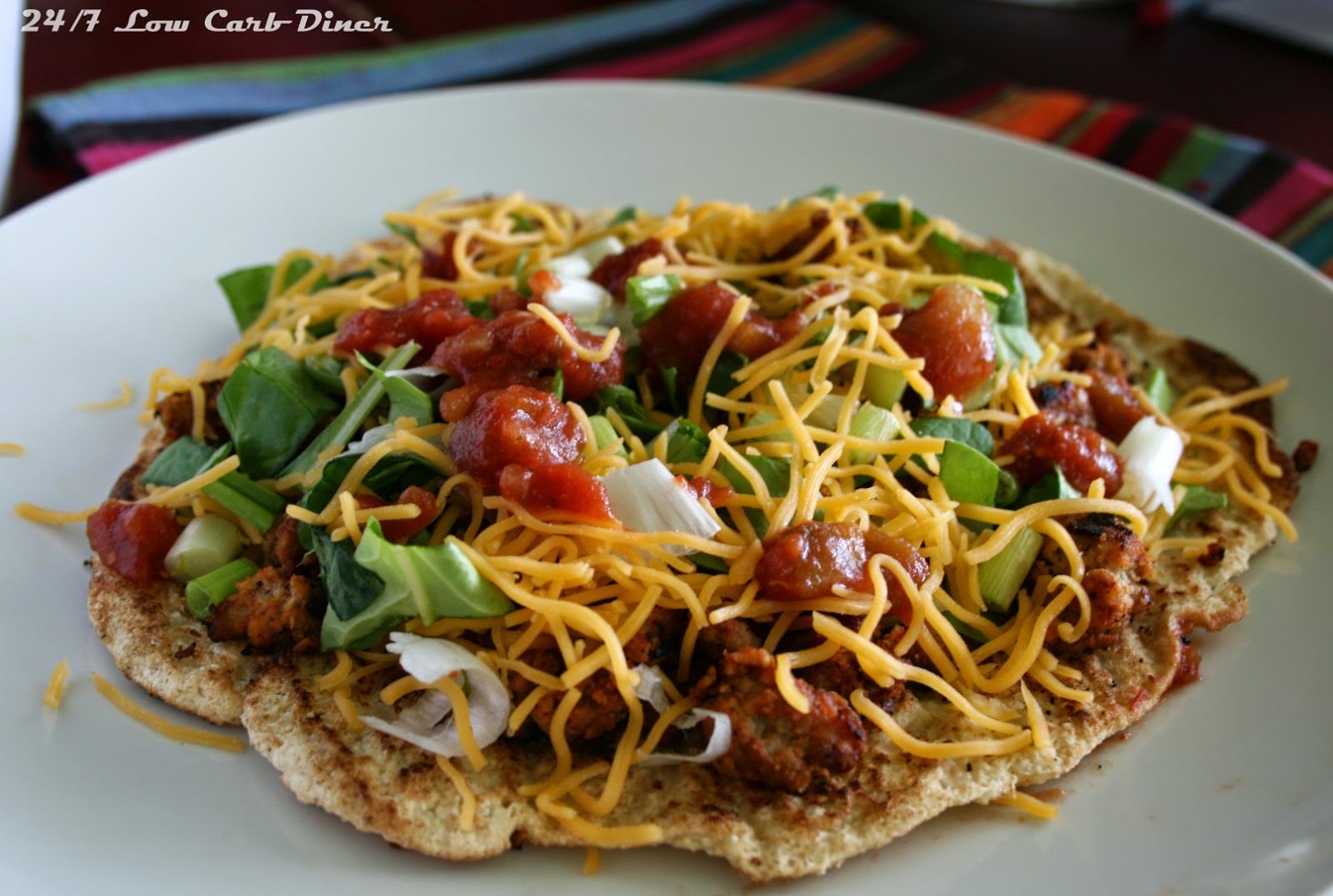 Indian Fry Bread recipes have always bothered me a bit. Being 1/4 Native American myself, I have never quite figured out how white flour and vegetables oils became an authentic native recipe. In addition, most every tribe claims its recipe as the original. So, I just need to put the true historian in me aside, and enjoy what I have here.

Indian fry bread is mostly like a biscuit dough flattened into a disk and fried. Around Oklahoma it is very popular to add taco fixings on top. Some say to add honey or sugar, but to me that makes a Mexican Sopapilla. I prefer the beef topping. Although this may not be authentic, you will find this dish at the state fair, street carnivals and area Pow-Wows. It is no wonder--they are very good!

This low carb version, of course, does not use wheat flour. I used a coconut flour and psyllium husk based dough to make a flatbread. That is a recipe I included in June's Picnic issue of the Diner News. It does make a great sandwich, but I wondered about tweaking it into a frybread. I think I managed today. Hubby really liked it. I made two versions, one with more oil and one with very little. I like the more fried one best for this. I also added a step to the flatbread recipe. I think it makes it a little easier to work with. 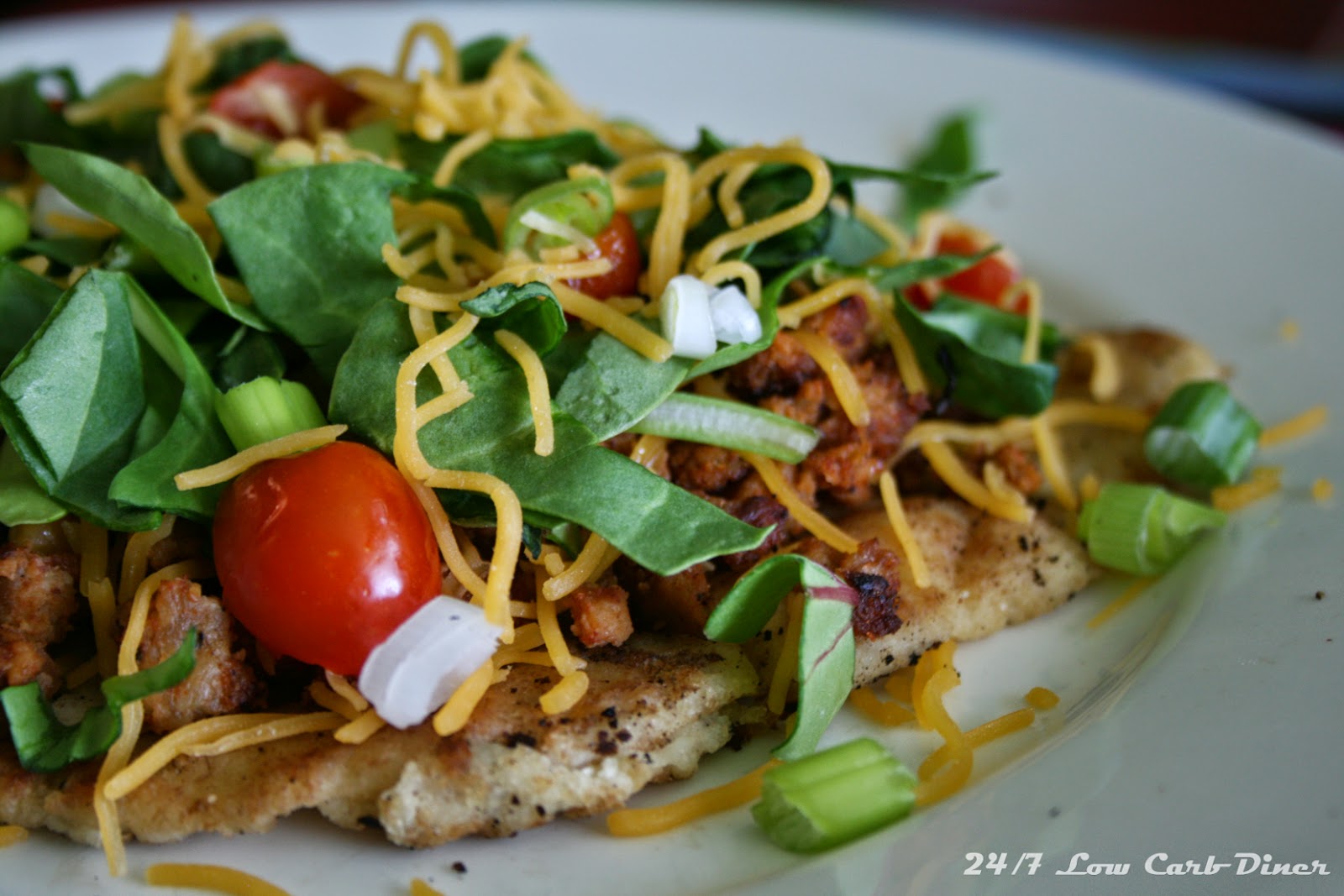 Because I don't own a good non stick grill pan, I tried a good deal of coconut oil in my stainless steel pan. Don't try that. The dough will absorb the oil and get really gooey. Lesson learned. Attempt #1 went into the trash. Attempt #2 used the oven. I know, I hate turning on the oven in the summer, but this really helped. After flattening the sticky dough on parchment paper, I popped them into the oven until they began to firm up. 5 or 6 minutes at 350 is good, I think. (I may have put them in a little before the oven was up to temperature.) Then they were much easier to put into the lightly oiled skillet. Win! I added some coconut oil and butter once the flatbread was nearly finished cooking. That gave it the fried taste without the gloppy mess. It is no more trouble than making  grilled cheese sandwich. I will explain the rest in the recipe. 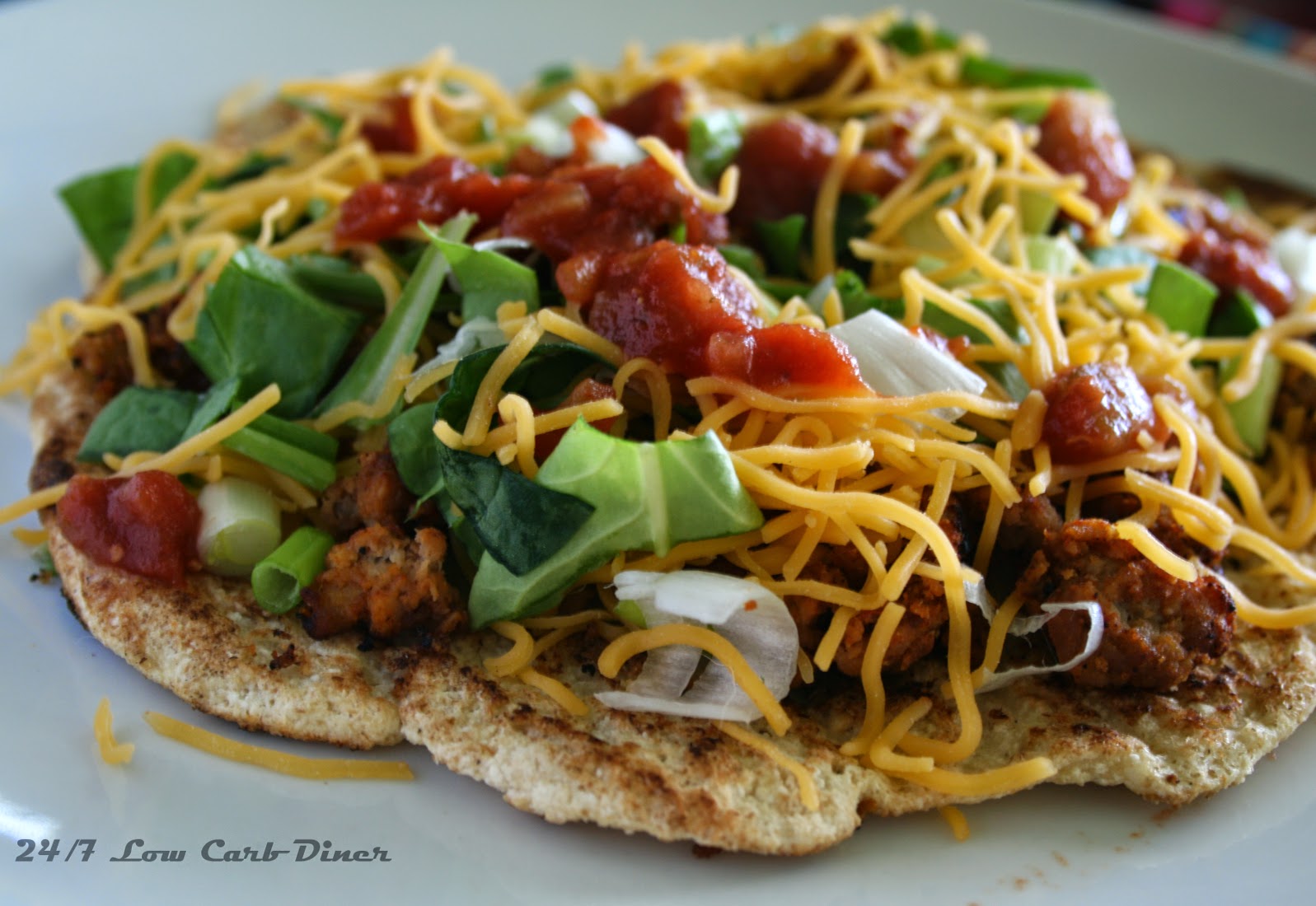 Grind psyllium husk powder in a bullet blender until it is a very fine powder. Do not skip this step. Although the flakes look small in the can, you must grind them. Combine the psyllium, coconut flour, baking powder, salt and garlic powder in a medium bowl. Add olive oil but do not stir. Pour the boiling water over all, stirring as you pour. Keep stirring until the dough forms and pulls away from the sides of the bowl. Divide the dough into 4 pieces. Place each ball on a square of parchment paper. Use your fingers to pat the dough out to a thin disk. (I like to place a sheet of parchment on top as well to help with the pressing of the dough, which can be sticky)

Place the sheets of parchment with the dough onto cookie sheets. Bake at 350 degrees for about 5-6 minutes until the dough begins to firm up but is not cooked through. While the breads are baking, brown the ground beef. Season with salsa, chili powder and cumin.


When breads have lost the shiny surface, remove them from the oven. Heat a skillet or griddle and coat lightly with refined coconut oil. Holding the parchment, flip the frybread onto the heated surface. Peel away the parchment. On medium heat, cook the frybread until the bottom begins to brown. Flip and cook the other side in the same way. This may take a little longer than you expect. Undercooking will leave a moist doughy frybread, while overcooking will make it too crisp and not flexible. When you think the bread is nearly ready, add a pat of butter and or more coconut oil to the skillet to "fry" it. This step is optional, but tasty. Brown for another minute on each side. Remove to a warm plate while you prepare the other fry breads.

Top each fry bread with seasoned ground beef. Add the toppings of your choice. 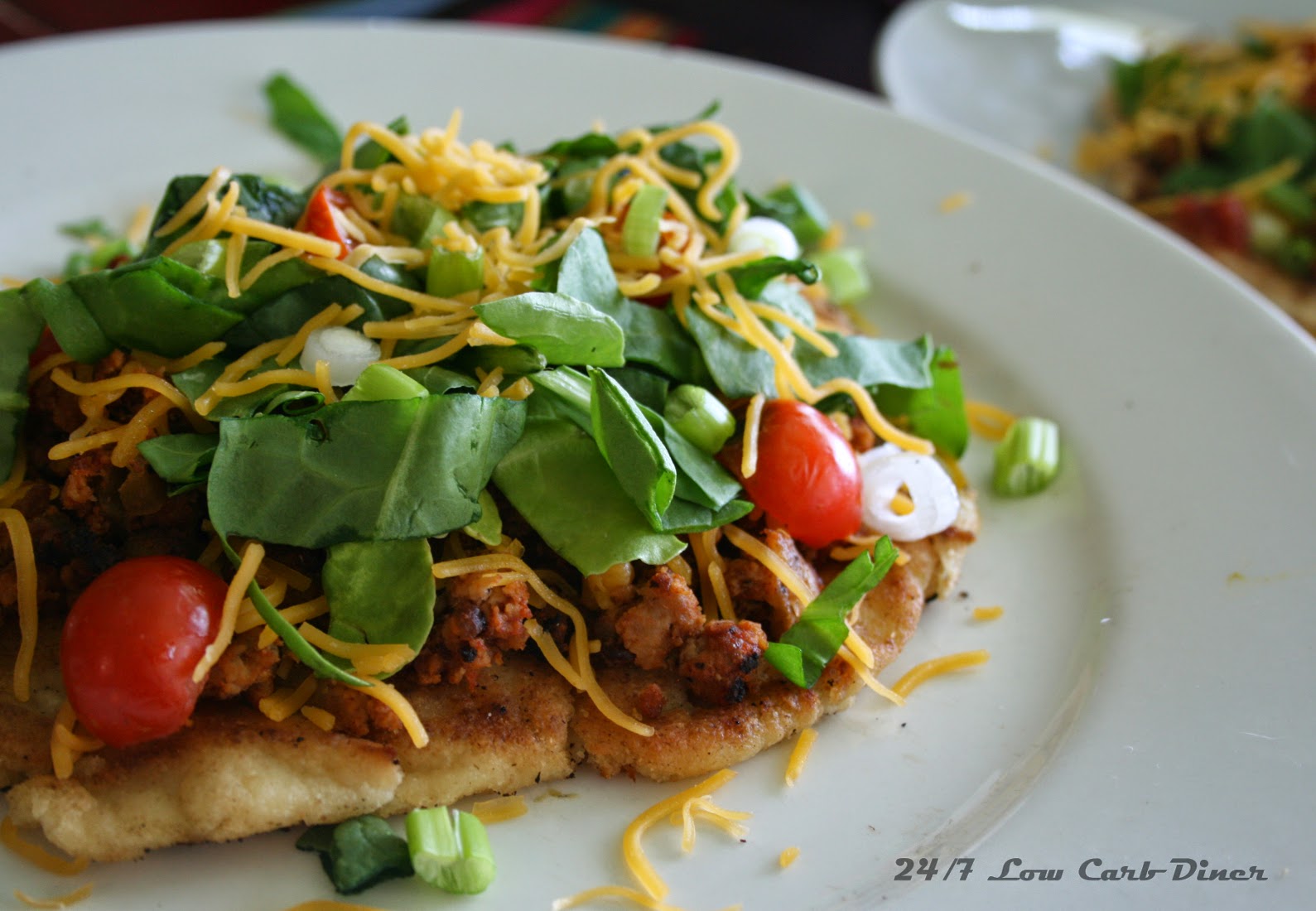 This is a very filling meal. I suppose the fiber in the psyllium helps with that. If you are not accustomed to eating psyllium husk fiber, be sure not to overdo on this recipe. Give your intestines time to adapt to all the fiber. I like to bake these flatbreads into pizza crust also. Just keep them in the oven until they are firm and browned. This way, you can fold the fry bread. You could fold it all up like a taco, but we chose to eat with a fork. Could be that I had lots of toppings! This recipe is adapted from Miracle Flatbread at Clever Cook. It is also similar to Judy Barnes Baker's favorite flatbread on the Carb Wars Blog. Mine is a little simpler and has no almond flour. 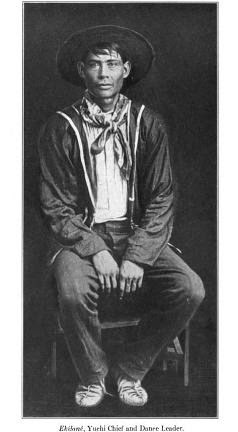 So like I said, this is not so traditional to the ancient Indian diet, so who cares that I am using coconut flour and psyllium husk. Doubting my more ancient Yuchi (Euchee) ancestors ate many of these of either variety. But like all cultures, we borrow a little from those around us and make it our own. I thought you might enjoy seeing a photo of my Great Grandfather, Lewis Ekilane Long. He was a small man by the looks of it. He was a Chief and Dance Leader for our small tribe. It is a sad story how the health of Native Americans has been so impacted by the introduction of sugars, wheat and refined foods. Diabetes is rampant among Native Americans. If they--we--returned to more traditional foods, what a difference there would be.

thanks for sharing this!!
the corporate american bleached flour, sugar death diet is killing us all.
I would love to see some authentic native american recipes here too!

Fry bread is not in any way a traditional native food. But, it was a cultural creation. According to my Native American History studies, during the tragic Trail of Tears journey when native Americans were forced to relocate to far away destinations, the government gave them quantities of flour, sugar and lard commodities to try to survive on. Since they walked great distances every day, their invention of fry bread helped keep them from starving.

Having never eaten fry bread, can you tell me: is it rigid, making your creation more of a "tostada", or does fry bread bend, so you can hold your creation like a taco?

This one is foldable when it is pan fried. It can get crisped if you make it thinner and bake it longer.

Just wondering how so many of the tribes who never participated in a relocation to Indian territory have similar recipes.

I work for a local Native Tribal Government and this Tribe has various frybread recipes too. Once you find someone who makes a good "Indian Taco" (as they call it here) you wait til that person or tribal member is making it again because they aren't all very good haha. I'm excited to try this version. My office is right next door to the tribes nutritionist and it's tough to see the low fat, portion control "eat less exercise more" mantra being taught. Luckily she does stress eliminating sugar and increasing veggies and whole foods however everything is nearly nonfat and tasteless! It's not really helping the youth or the tribal elders at all. I just wish I could share some of the truth to help!!! I'm afraid I'd be shot down terribly. My profession has nothing to do with nutrition though I took fitness and nutrition in prep to get certified I never did do it. I regret that and maybe someday I will so I can have some pull or influence on the health of those natives that are struggling with obesity and diabetes. It truly is rampant. :-( It breaks my heart to see.

fantastic recipe. I really love the flavor and texture that psyllium adds to LC "bread". I think I didn't thin these out enough before par-baking, cause no matter how long I fried them they stayed dough-y inside.

Still delicious though - used them as naan with indian food :) ate one of the four right out of the fry pan...!

I can't wait to try these, they look delish and one thing I miss most is soft taco shells. I think this might do the job. Thanks for sharing!

Is psyllium the same as metamucil and could I use that. I don't have psyllium and haven't seen it here. Thanks for the info. loved your recipe and info on the Indians.I live in an area that has quite a few Indian peoples and at their pow wows they make the indian fry bread. I loved it but now do lchf so no more.

Brunella--Not sure on the metamucil. Psyllium is easy to order online. Here is an expample from Vitacost. http://www.vitacost.com/vitacost-psyllium-husk-powder-5000-mg-22-oz-625-g-1

I get mine from the natural grocers--Sprouts.

These were yummy. I skipped on the garlic powder though. Anyway, I didn't have luck with my first two. They didn't want to get done and we're sticking to my ceramic non stick pan. With the last two, I popped them back in the oven and flipped them several times on the parchment. I finished them off by frying in the butter. I used one With taco toppings, my husband used it as a "bun" for a brat!

Thanks for this, i need to try!!! Being Native and on this LCHF/keto I been missing Indian tacos & frybread!!! :< hopefully this is a great substitute. Its hard to be on this when the rez normalcy is everything against Keto but the meats lol

This means that you actually burn fat by consuming Coconut Fat (in addition to coconut milk, coconut cream and coconut oil).

These 3 studies from large medicinal journals are sure to turn the conventional nutrition world around!