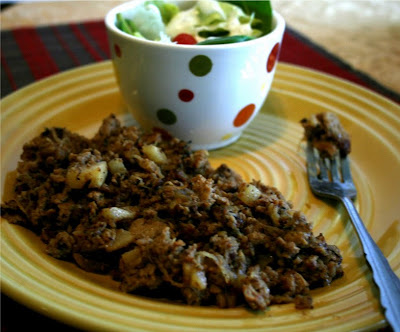 So I posted this pic over on Facebook--not that it is much to look at. It was filling and tasty though. I wasn't going to post the recipe from tonight's dinner because I feel like I still have so much to learn about jicama. But since some of you asked, I will go ahead and share. It seems like I am really making some ugly food lately. Diamonds in the rough, though.

I want to play around with jicama more. I have been reading all I can about the so-called Mexican Potato. I hadn't planned on buying it when I went to the grocery store. I was searching out a rutabaga. The ones I found looked like they had been around since the disco age, so I passed. My mom suggested I try a jicama. I like it raw, but had a hard time getting it soft when cooked...it always reminded me more of water chestnuts. I do love those, but they are not like a potato. Alas, knowing my boys had some red potatoes on the menu, and being unable to consume them myself, I had to do something. I used to be a big tater girl. I miss those, and it is hard to cook them and not get to partake of that feast. So, jicama it was!

Now, after some research, I understand that to tenderize this formidable root, we must give it a spa treatment involving fine dicing, freezing, squeezing and even possible nuking. I did not have time for that today. I opted for the express treatment. Unafraid, I hauled out my spiral slicer and my vegetable peeler. Wow, was this jicama hard to peel. I don't remember struggling that much before. Must be getting old. I finally devised a rock back and forth method of peeling rather than my usual quick swipe. That worked best, but it is hard to describe. Anyway...

I used the ribbon cutter to make really thin slices. Online, I learned that some had luck with making oven chips. I tried baking those. Delicious as they were, they were nothing like chips. Besides that, it took 20 minutes to bake one cookie sheet of slices and only five minutes for me to single handedly devour the entire batch. They did remind me of this old style Hamburger Helper my mom used to make. In fact, I think my husband even asked me to marry him because I could make Hamburger Helper. I think the one I remember was potato stroganoff or something similar. It came--or comes, as it may still exist--with these dehydrated potato slices. For some reason, that is what I was aiming for. That inspiration turned into today's hash recipe and some future experimentation with hashbrowns. I know others have had luck with those after they have devised a way to make the jicama soft and not so sweet. Soon, I will try those.

By this time, the dinner hour was fast approaching and the kids were already making those hungry noises. Time to get something on the table fast. Their potato dish was doing fine, if only I could adapt the jicama for us. I decided the way to avoid large crunchy chunks was a smaller cut. I had no time to freeze and pre-cook. Half of the jicama went into the slicer with the julienne blade. I got tiny angel hair strips that would also make a terrific salad. Just like a kid, I always get excited when I see a veggie cut that way. I decided to get some different textures, I would cut some into cubes by hand. I was going for a little of the home fries feel where a few cubes are always crunchier and a few softer.

Because I was taking advantage of my Minute Beef, I added a little oil to the skillet. I fried the jicama cubes in that for about ten minutes to give them a head start. I squeezed the julienned jicama with my hand to get out extra moisture. Then I added the julienne strips to the skillet for about five minutes. Lastly, I added the precooked ground beef and let it fry for about ten minutes. For seasoning, I used Braggs Liquid Aminos, onion powder and the beef broth. It was a simple meal, but really homey. A lot like the old Hamburger Helper, in fact. Next time, I will add more different veggies, especially onion and celery. But for simplicity sake, this is the recipe. You could build your hash from this basic plan.

Peel the jicama. Cut about a quarter of it into a small dice. The remaining, shred in a food processor, spiral cutter or even a hand grater. The smaller the cut, the more tender the end product will be. Add the oil to a skillet. When it is hot, add the cubes of jicama. Let them cook for about ten minutes, then add the smaller shredded jicama and cook for another five minutes. If using fresh ground beef, add it at the same time. If using pre cooked Minute beef, add it after the shreds have browned for five minutes. Sprinkle with the onion powder. While this is browning, make the sauce. Pour the broth into a bowl and stir in the Bragg's or soy sauce. Very slowly add the glucomannan while whisking rapidly. Pour the sauce into the skillet and stir to coat. The sauce will thicken a bit more with heating.

Jicama has about 5 net carbs per cup, and only 46 calories. It is not a nutrition super food by any means, but can come in handy when we crave a manly meat and potatoes type meal. I think I will play around with making a replacement for rice and come up with some more jicama salads. Low carbing never gets boring because it seems like there is always something different to play with in the kitchen.

Email ThisBlogThis!Share to TwitterShare to FacebookShare to Pinterest
Labels: beef

I have spent the past week reading your blog, and I have to say that I could not have picked a better use of my time. I have learned so much, and have really enjoyed your writing style and all of your fabulous recipes. I'm planning to buy your ebook in the next week or so (waiting for payday). I'm south of you in Texas and love your whole diner food philosophy. This is the way that my family eats too.

I just left a long message & when I went to preview it I got an error screen! So you may get 2 similar messages from me. :(

Love the 2 textures idea, can't wait to try "Jicama Helper". I love Jicama and use it often. It's great in salads and you can make a good substitute for a Waldorf salad with it. Love it raw, my DIL is from Mexico and they traditionally ate it raw, sprinkled with lime juice and hot sauce. I do that as a quick snack. I keep slices of it in a container (cover with water) in the fridge so I have it handy when I want a little something crunchy at night. I also make oven "fries" that my grandkids (& their mom) like. I boil julienne sticks for 10-15 min. drain and cool a few min. then drizzle some olive oil. I use my hands to coat all the sticks. Place on parchment lined baking sheets and cook at 400 until slightly golden then turn and cook a while more, I just eyeball it so I don't have exact times. I sprinkle with sea salt while they're hot. I don't tell the kids they're french fries because, of course they don't taste like FF but the kids love then as something new and tasty!
This is my 4th attempt!
Going to try posting as Anonymous to see if it works.
Granny Mumantoog

You two just made my day. Thanks!
Granny--I am definitely going to try that way too. If you want, make some and take a picture and I will feature you as my guest blogger. I love to share great ideas from my readers. And I am glad you finally got through!

Did you know that you can create short links with AdFly and get dollars from every visitor to your short links.