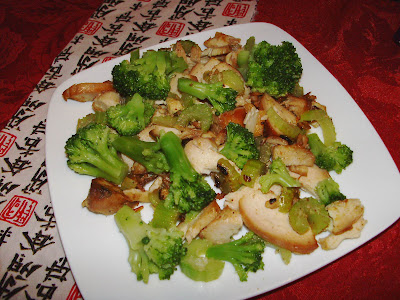 The world is a mess! But sometimes, that works out alright. We were stuck in a huge mess of traffic tonight. I swear that every tax dollar, every federal incentive dollar has gone into tearing up our streets. Every street it seems. While it took us an hour and a half to go about 5 miles on the highway, my hubby was stuck in the same mess. So much for getting dinner on the table in a timely fashion.

Once John drug his weary bones through the door, he mentioned that he almost called to say to meet him for Chinese food on one of the few clear streets. Being the sensitive hubby he is, and knowing I have been seriously dieting as of late, he refrained from bringing me into such temptation. While I love Chinese food, it is notorious for hiding unrecognizable carbs. So, I changed up our dinner plans a bit for the occasion. Instead of the Hobo Dinners I had planned, I opted for Chinese.

This was possible because my spice cabinet, like the world, is a mess right now. I really thought I had extra soy sauce, but did not. That in turn foiled my plans to make the Chinese soup we were supposed to have for lunch today. But, it did still allow for a quick stir fry to make my guy happy. It is good for my diet too since I am adding back in fats right now, so it all works out afterall.

I simply have used the leftover Chinese Chicken from our Triple Play meal. I added broccoli and celery and a good helping of roasted sesame seed oil. That stuff has amazing flavor! I think I would like old shoe leather if it was drenched in roasted sesame oil. Plus, thanks to my diet efforts as of late, I have found a new love for cooked celery. It is really tasty grilled or sauteed as in this recipe, and adds a great little crunch. I have also discovered that I love chicken and celery soup. Pretty good considering I really do not care for raw celery sticks-- even with peanut butter.

Because the chicken is already marinated and full of flavor, this stir fry did not need a sauce. Since those are tricky to make without starches, that makes this all the easier. Now on to some relaxation after all those traffic headaches!

Posted by Lisa Marshall at 7:25 PM