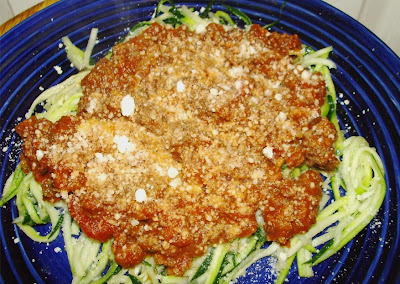 If you have been a Diner for long, you know that I am frugal. But, I am also a label reader. Both of those skills helped me find a great new pasta sauce. I like the no sugar added sauce here, but I used to have this old favorite. One that came in a can and was pretty darn cheap. The flavor was unlike most traditional sauces, rich with bell peppers and onions.Unfortunately, it had the peppers I love and the sugar I don't. That was the end of that sauce. Last weekend, in a weekend jaunt to Big Lots, I found this prize. Muir Glen Organic Italian Sausage with Peppers. Oh my. This is the flavor I had been missing. In fact, it is even better than the sugary brand! With the price of bell peppers lately, I could not have made this cheaper. Especially not if I had added Italian Sausage as well. Add to that the price of organic foods. Can you believe this sauce is just $1.30 for a 25 ounce jar? My kind of value. Even with the added peppers, this sauce is just two more carbs per serving than the no sugar sauce. 8 carbs is a pretty good carb bargain. Many jarred sauces are 17-20 carbs per serving. 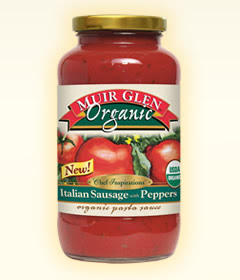 Of course, there is not enough meat in there for the traditional "meataholics" who live at my house, but the sauce is very thick and full flavored. I added a pound of lean ground beef and a few leftover chunks of zucchini.

Speaking of zucchini, I used that wonder veg for our noodles tonight. I pulled out the handy dandy julienne slicer and made some zucchini "pasta." I just sliced a large zucchini, added a couple tablespoons of good olive oil, a shake or two of garlic, and then steamed everything in the microwave. These zucchini strips are good to add to replace noodles in soups too. 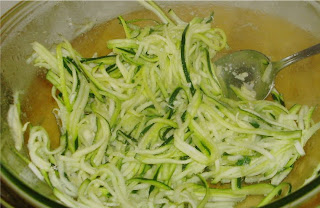 The carby boy got some cheap pasta, also from Big Lots. As usual, I made enough of that to store away some leftovers for another meal. Don't just think of your low carb foods when you cook ahead. Cook ahead for the carbies in your life too and you won't be so tempted when cooking.

I just added a side salad and we were ready to eat.

Posted by Lisa Marshall at 6:28 PM

Email ThisBlogThis!Share to TwitterShare to FacebookShare to Pinterest
Labels: beef, side dish

Man, I wish I had your Big Lots here! I've been to at least 3 of them in the Nashville area, but none of them have the lovely sugar free, low carb stuff that you are able to find. Jealous!

what a great buy! i need to stop by that place more often!!!