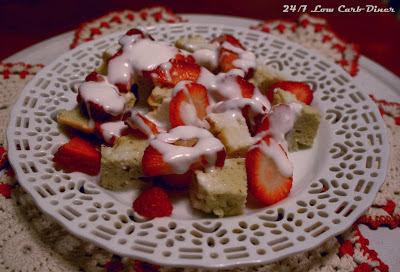 This may be a cousin to a strawberry shortcake... but there is more going on. The coconut and the citrus take it to another level. It would be a nice dessert for your Valentine dinner. I cut my pound cake into cubes and just spooned the toppings over, but it would be wonderful in individual trifle dishes for an extra special dessert. Sorry the photo is not the greatest, but the sun goes down too early to get dessert in there! Generally, I am not a huge fan of coconut flour cakes. The texture tends to be fine and a little dry to me. I knew this application I had in mind would work though, because the berries and the sauce would add different textures and flavors. It works for me.

In a medium bowl, mix coconut flour, baking powder and salt. Break up any lumps. In another bowl, combine coconut milk, eggs, vanilla, extract and sweetener. Reserve the remaining coconut milk for the cream to top the dessert. Beat until well combined. Stir the dry ingredients into the wet a half cup at a time until most all lumps are gone. The mixture will thicken as the coconut flour absorbs the moisture.  Spread into a greased loaf pan and bake at 350 degrees for 45 minutes.

The pound cake can be made without the citrus flavor, but I have found it really compliments the coconut. I made this nice little dessert a little ahead of Valentine's Day because I wanted a dessert I could eat now! I have been busy baking some trial runs of desserts for the rehearsal dinner coming up in a couple of weeks.  I am saving a little money by hosting a dessert tasting event after the more formal dinner at a local Italian restaurant.  It will be fun, but of course, for this crowd, the selections will not be low carb. I made some S'more waffle sticks, which I may just try out as a low carb recipe in the future. We will see.

Today,  we had lots of kids home sick from school, so I was able to come home early. I had the munchies, and tried out a Red Velvet Smoothie I had been thinking about. That was good. I think I will make them for Valentine's breakfast too, so be watching. I will try to have that recipe posted tomorrow.

Posted by Lisa Marshall at 9:36 PM

Looks amazing! Do you think the cake batter would hold up with almond milk instead of full fat coconut? Or does that help it bind up better?

I think it would probably work, but you might add in some butter to replace the fat.

The meaning of this is that you literally kill fat by eating Coconut Fats (including coconut milk, coconut cream and coconut oil).

These 3 studies from big medical journals are sure to turn the traditional nutrition world upside down!