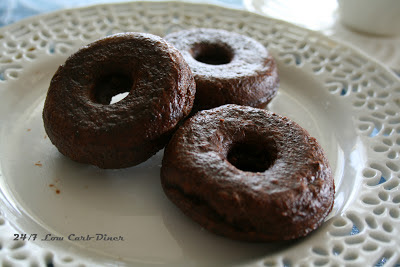 I have a pet peeve. A purely personal, purely egocentric peeve. And it rears its ugly head again today. I always feel slighted when I see a friend  rave about a cooking idea that I shared on my blog, e-book or newsletter ages ago. It is like--"um, yeah, I have heard about that before. If you really paid any attention to the blog and newsletter I worry over all the time , you would know that." Sure, I am being a jealous blogger. Not my proudest moment, but it explains these donuts.

I was lying awake in bed this morning, worried about what on earth I could come up with that is original, tasty and new. I was at a loss. I really wanted to make mini donuts because my mom gave me a new donut machine for Christmas. Having been on the Whole 30 Challenge for a month, I had not been able to try it out. But then, I didn't have a lot of time or  ingredients to play around with several recipes. Did  I dare I do something so similar to recipes I have done in the past? I contemplated that, my inner voice telling me I could do better. Then I notice friends pinning food ideas (from someone else) that I published months and years ago. I see others on Facebook sharing pictures of treats that, hello, I have so done. Grumpy blogger time.

Now granted, not everyone is my follower. I borrow ideas too--though I share credit for inspiration when due. But it does get a little disheartening to have a great idea, put in the effort to create, photograph, and publish only to be old news. So today, you get old news. Donuts again. Rant over.

I had a little bit of a tough time with these donuts. I wanted to replace some of the egg with chia gel. I did that. I wanted to use coconut flour as my base. I did that. I also wanted to try to use stevia rather than another sweetener. I think I did that, although I did have to add more after tasting the first batch. My older recipes use syrups.

In addition, I know I did a whole newsletter on kitchen electronics in Jan. 2012. But I didn't have a donut maker then. I know I have given you coconut flour donut holes. I have books with my donut recipe--even with the coconut oil glaze. How are these different? Just a little mocha flavor. Still with me? You deserve a prize. 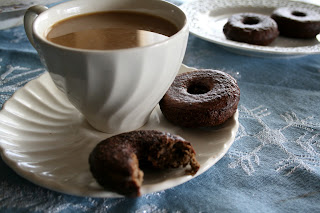 In a medium bowl, combine coconut flour, baking powder and salt. In a small bowl or saucepan, melt coconut oil and unsweetened chocolate. Stir in sweetener and instant coffee. Stir eggs and chia gel into the chocolate mixture. Be sure it is not so hot as to cook the raw egg. Combine with the dry ingredients and stir well until no lumps remain.

Scoop batter into the donut maker or donut pan. Spread the batter to the edges of the pan, and smooth the top. It should be rounded above the level of the pan. Bake until steaming stops or tops are set. (approximately 5 minutes in the machine or 12-15 minutes in the oven at 350 degrees)

To make glaze, melt coconut oil in a mug. Stir in cocoa powder, coffee and sweetener to taste. Dip donuts into the glaze to coat all over. Remove and place on a rack or nonstick surface, Chill to set glaze.  Makes about 24-28 mini donuts.

These turned out very tasty. They are not the next big thing, but we enjoyed them. They are healthier than a high carb donut for sure. Natural goodness, and another option for breakfast or a nice little dessert. I will still keep trying to come up with new ideas, and I am sure there will be more days when the latest greatest thing is something I did before. I guess it is part of getting old and having lots of competition. C'est la Vie.I have a few more ideas for trial runs with the new E.Z.Sweetz. I will be giving my opinion on that later, so be watching.

Thank you for this recipe. I also received a cake pop maker for Christmas and these sound yummy. I have also decided to start using more of the stevia after listening to a podcast on the artificial sweeteners and which ones are so bad for our health. I really appreciate you sharing with those of us like myself--who struggle in the kitchen. I plan on making these tomorrow'!!

You have FIVE YEARS of archived recipes that are a goldmine for anyone willing to look! What a monumental amount of work and dedication they represent.

So put your feet up, have a mini donut, and don't feel pressured to re-invent the wheel every day. :-D

You are so creative in the kitchen, it's worth waiting for when inspiration strikes you.

PS: your new cookbook, Volume 3 came today. Can't wait to try something out. I've already been thumbing through it to see what ingredients I happen to already have on hand that I could play with. :-)

Dont worry about what everyone else is doing, there are tons of low carb bloggers and health "experts" putting out recipes all over the place. Just keep making great stuff. The thing is you may have blogged donuts before but its new to me!! Its ok to recycle old ideas because there are a miloion people who havent seen them yet. :-)

I agree with what the most recent poster said...you have so many great ideas...no need to reinvent the wheel every day!! And every day someone new is going to discover YOU and share your recipes as well!! (like me! I discovered your blog about a year ago) so many great ones! I just got a donut pan for Christmas! So I'm glad you remade the donut recipe! I think I'll try these over the weekend!! (and I have lots of chia on hand...never thought to bake with it!!!)

These sound great but what are the carb count on them?

Is this good for a phase 1 atkin-er? How many carbs?

Those look lovely, Lisa! I haven't tried any LC donut recipes yet....I don't trust myself around sweets at breakfast. Just being honest. LOL I figure the rare pancake breakfast is all I dar allow myself until I reach goal. :)

I am not a blogger, but I totally get what you are saying. My mother does this to me...I will tell her something, say about coconut oil & its benefits. Well she will pretend to listen & change the subject, then weeks or months later, someone else tells her about coconut oil benefits & it's all she can talk about. grr @@

I am trying to talk myself into getting a cake pop or donut maker...but not sure it would ever get put away, with yummy recipes like this. :)

THANK YOU for all your hard work!!

I popped in this morning to look for "make ahead" breakfast ideas and these are "new" and perfect! I love your other donut recipes and use them all the time in my mini cupcake and mini donut makers! I got an ice cream sandwich sandwich maker for Christmas this year that I have been dying to try out (though I plan to call it a "mini waffle maker" since I don't care for ice cream sandwiches and even low-carbed, they are too high carb for me right now anyway! Revamped recipes are awesome in my opinion because it gives you even more options when the "old" ones are getting, well, old!

Well done for all the great recipes, but who can remember where each recipe came from-time to get over yourself I think or don't blog!

The meaning of this is that you literally burn fat by consuming Coconut Fats (including coconut milk, coconut cream and coconut oil).

These 3 researches from big medicinal journals are sure to turn the conventional nutrition world around!