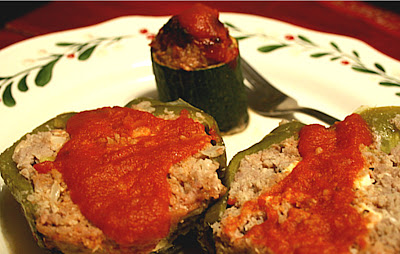 It seems like I have been posting all sweet treats lately. We really are still eating dinners, I promise. Relying on the old standards makes the busy holiday season easier, but they aren't so interesting for blogging. Tonight, I made these stuffed peppers for my youngest son, who loves bell peppers, and is feeling a little under the weather. Then at the last minute, he ended up ring shopping with his girlfriend. Hmm. Certain girls have a way of making sick boys feel better like moms just can't.

So, his portion went into the fridge for lunch tomorrow. One of these days, she will be cooking for him instead of me. I had best feed him while I can! My sweet middle son is finishing up finals tomorrow, so I am really looking forward to hugging his neck and cooking for him. After college food, they always appreciate Mom's Diner.

Tonight, I ran short in the pepper department and long on zucchini squash. Rather than make a zucchini boat, something that does not offer too much appeal for my men, I made little squatty stuffed zucchini. I liked them, and you might too. Silly boys.

Many, I say MANY recipes call for rice as a filler. I subbed cauliflower, and no one would be the wiser. I added some coconut flour so it would all stick together. It did great there. Some feta cheese gave outstanding flavor, as did the oregano and lemon pepper. These had to be the most flavorful stuffed peppers I have had. For me,  I may have thrown in some cinnamon, but my guys don't rave about that either. Do what you want.

There are also two camps on the baking procedure. Some people pre-brown the meat. This certainly shortens the baking time. It does, in my opinion, make the dish messier. Packing in raw meat leaves it more like a mini meatloaf inside the pepper and less like a sloppy joe. If you are running out of time, go ahead and brown the meat first, but leave out the coconut flour. Maybe an egg as a  binder? Not sure, but maybe. I know the hour and a half oven time is well worth it.


Greek Inspired Stuffed Peppers (and zucchini if you want)

Cut the tops off bell peppers and remove the seeds. If using zucchini, remove stem and base, and cut into 4-5 chunks. Use a melon baller to hollow out a cavity from the zucchini. Reserve the squash cuttings to add to the cauliflower.


Use a food processor to finely dice the raw cauliflower and zucchini. In a large bowl, combine the cauliflower  with the ground meat, coconut flour and all the spices. Stir in the feta cheese. Fill the peppers with the meat mixture. If making zucchini, fill those, rounding the tops with a spoon. Place the filled vegetables in a baking dish and spoon spaghetti sauce over the top. Cove the dish with foil and bake for 1 hour at 375 degrees. Remove the foil from the dish and bake another 30 minutes at 350 degrees. Use a meat thermometer to make certain the middle of the peppers register 165 degrees.

Add a little more sauce if you want. This is yummy stuff!

P.S. The boy came home from shopping and ate his portion anyway. Good, because that is the one I need to get some weight on!

I always cook the meat first, start with an onion and some garlic, add the meat; it may not be thoroughly cooked, but it will be in the oven.
I just can't imagine putting it in uncooked.

I have made these with quinoa, to make them lower carb. I grew up eating them with rice, so I'm used to that flavor. They also need quite a bit of seasoning, chopped parsley, mint and dried dill.

They are fine uncooked, because it bakes an hour and a half. That is plenty of time. I have pre-cooked before and that is always an option.