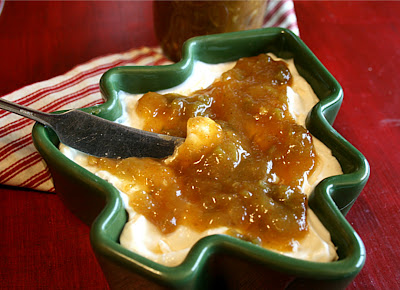 I have always had a thing for Jalapeno Pepper Jelly. I used to make some at Christmas time because I adore the flavor of the sweet hot jelly warmed and poured over a block of cream cheese. Then I stopped. The sugar content in my old recipe was huge. Not knowing much about making sugarfree jams and jellies, but knowing enough kitchen chemistry to bet that was a tricky process, I just gave it up. Sugarfree cranberry sauce took the place of the beloved jalapeno jelly.

Yesterday, my middle son Pearson, asked if we could have some again this year. I have such a hard time saying no to my guys, so I decided to take the challenge. We happened to be headed for Walmart anyway, so I picked up a jar of the Ball brand no sugar pectin. Then a new recipe search was on. Really didn't find much, considering I wanted to use canned pickled jalapenos I had  languishing on a back shelf of the pantry. My old recipe had used canned jalapenos, and I wanted to duplicate that flavor. The recipes I found using Truvia called for fresh peppers. Others called for bell peppers. No again. Armed with some jam making generalizations jumping around in my brain, I headed for the kitchen with no recipe at all. What I ended up with is not quite what I used to make, but it is a better jam texture and it does taste like peppers. If anything, it is a little more gourmet than my old recipe, so I guess I took it up a notch. This one calls for three different forms of chili peppers. In addition to the pickled jalapenos, it has some green chilies and some chili powder. That son who asked for it, is now eating it for breakfast. I guess it passed his test.

The green chiles, which are in abundance in my freezer since I buy the giant cans, make it more jam like than many of the versions I have tried in the past. I like that, as some seem a little more like syrup at times. ( I had one sugared version that never really set up) The chili powder adds a depth of flavor missing from conventional recipes. The only thing I would do differently next time, is to lower the amount of lemon juice. The lemon flavor was a little too pronounced for me.  I am going to adjust that in the recipe I am publishing here--pretty sure it will work the same. Still in? Here ya go!

Finely chop the pickled jalapeno peppers in a food processor.  Heat the butter in a medium saucepan. Stir in the chopped jalapenos and the green chilies. Coat well and saute 2-3 minutes. Add the erythritol, vinegar, water, lemon juice, chili powder and liquid stevia. Stir over medium heat to dissolve sweetener. Heat to boiling. Remove from heat and gradually stir in the powdered pectin. Return pan to heat to resume boil. When the mixture boils, remove from heat and pour into three clean jelly jars. Seal and cool.

Obviously, I did not process these in a canner for long term storage. These would keep more like a freezer jam, for several weeks. I am not sure if erythritol acts as a preservative like cane sugar does. There is enough vinegar in there to do a good job in that area though. We will see. Not sure if three small jars will last through New Year's Eve around here anyway!

If you want to make some, especially here at the holidays, it would be very pretty with some red bell pepper thrown into the mix too.  Now what to do? Well, the obvious, and my personal favorite, is to put some over a block of cream cheese and serve with veggie dippers and crackers. You can also spoon the jelly over ham, meatballs or chicken breast. I hear some even use pepper jelly on a sandwich. I don't know about you, but I am too busy with last minute details to be making low carb bread right now. Ours will be appetizer fare! In the photo, I warmed some leftover cheeseball and spread it into a Christmas tree dish. That is too festive! Merry Christmas, Diners.

Love the presentation. Merry Christmas and a Happy New Year to you and your family.

That looks so good Lisa! I have a friend who makes pepper jelly every year.

Have a great Christmas and New Year!