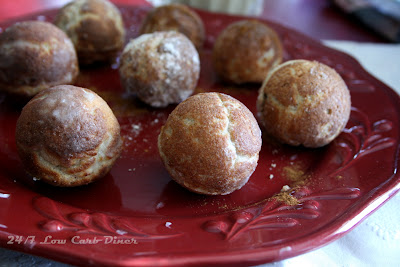 I managed to get a slight upgrade for breakfast today. Lately it has been lots of pre-cooked sausage patties. I have been running out the door with an insane life lately, dealing with getting my school house renovated and dealing with the death of my father. Hard to prioritize recipe creation in there.

This one is not so much a new recipe either--but it is a new adaptation of an old recipe. Since I have received several snotty comments lately about not posting every recipe, I will include this variation along with the original. I want to take a minute to thank those of you who sent notes of support to me. I do get hurt when readers get all bent out of shape about my promotion of my cookbooks. Afterall, I do say that this blog is a companion to my Diner e-book. It is a companion to our Low Carbing Among Friends series as well. I certainly don't promote my blog as a free recipe page, although there are hundreds of free recipes. Go figure. I suppose turning on my computer after a tough day, it is even harder to see those comments. Thankfully I have my faithful followers. Your nice comments keep me going.

These were tasty. Like my original recipe, these are made with coconut flour. They make the texture really similar to those packaged Gems. I made doughnut holes this time, but if you want to turn on the oven, the doughnut pan would work too. I used my little cakeball machine this morning. Quicker and less heat. Over hundred again here. I hate summer heat.

The secret ingredient today was the addition of Cinnamon Danish Swirl flavoring drops by Capella. This is one of my favorite flavors. I add it to my coffee sometimes too. Especially if I have a second cup. You can omit this, and add any flavoring you like. This is a very versatile recipe.


Preheat cakeball maker. Spray with cooking spray or coat with melted coconut oil.
In a small bowl, combine the coconut flour, salt, sweetener, baking soda and cinnamon. Stir the eggs, syrup and coconut oil into the dry ingredients. Mix until combined.If your eggs are cold, place the mixture into the microwave oven for 20 seconds to remelt the coconut oil and thin the batter.
Spoon half the batter into the cakeball maker. Close the lid and bake for 5 - 7 minutes.
Make the glaze by combining the powdered sweetener, water and flavoring drops. Dip the holes into the glaze, then sprinkle with additional cinnamon.

John really appreciated these this morning, even though I did serve them with a side of pre-cooked sausage. Again. I thought I should share a bit of my newest project with you. Here at the end of the post, so that if you don't give a hoot, you can just move on. This is the project I was working on at the school yesterday. It is for our literature room and library. The mural is flanked by couches so the teens can sit and read or hold book discussions. It reads, "Love all, trust a few, do wrong to none." Seemed fitting for today. Thanks, Shakespeare. 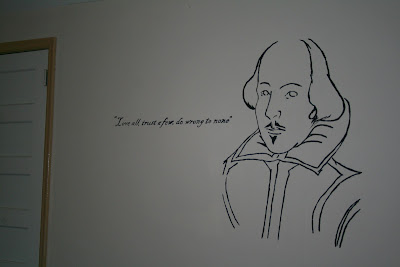 Just wanted to say I appreciate all your free recipes! And the other pictures you post just make me want to buy that cookbook. I really need to do that - lol. Hope you have a great day!
Kim

I have just recently found you & I enjoy all of your post & recipes! Thank you for all of your time and effort!!

I made your original coconut flour donuts out of LCAF vol 1 and OMG, they were so close to those little powdered donuts that I went a little crazy on them for about a week. Lets just say it was a TAD too long and I paid for it lol. This is my favorite LC bakery recipes to date! Its very versatile too, you can change the flavors up really easily. Thank you so much for the recipe!

People have no idea, Lisa, how much work goes into producing a cookbook, and it's crazy for them to expect you to always give them of your hard work for free. I'm thankful for all the work you do to freely give help and encouragement to to others, and I know you've given away many freebies! God bless you, and I'm so sorry to hear about you losing your father. I hope the Lord's comfort will sustain you.

Thanks for this recipe, sounds yummy. Have you tried making these with almond flour? I have not seen coconut flour in my area.

Sorry I have to ask, carb counts?. I have LCAF and will look at that recipe. Can't wait to try these! Truly appreciate all u do

I didn't know of your loss and I want to offer sympathy to you. That's a hard loss and my heart goes out to You. Thanks for all you do...I love the first cookbook by the way!

Tell them all to kiss your patootie, Lisa! You're doing it the right way, and don't worry - those of us who are sane and follow along realize exactly who you are and what you're about. The others of you out there can stuff it! Leave Lisa alone, and don't be so cheap - go buy the cookbook if you want the recipe! :)

Shake off the snide comments Lisa...! You do a great job. I'm sure if they were as talented as you are that they would have NO problem charging for their recipes.

I'm just glad you do share some here and there. It gives me motivation to buy your eBook when I can. I KNOW I'll love it based on everything else you've done. And I DO have LCAF already...! Love it.

I'm so sorry for the difficulties, Lisa. Hardships come so grace can follow, and you are more than deserving of grace. Love you, and all the work you do. You inspire me!

I have coconut flour but I can't find coconut oil. Is there a substitute for coconut oil?

Colleen, I've used regular oil and it works fine, I even used melted butter once. I will also add that coconut oil is easier to find than you think, even Walmart carries it now. It is a bit pricier however so I can't always afford to get it.

Thanks! I'll try that. Has anyone figured out the traditional info on this recipe?? My friends are restricted to a certain amount of sodium a day. So I want to make sure I don't give them something that has more than what they can have.

Colleen, you can plug any recipe into several different "recipe calculators" on the internet. That way if you need to sub ingredients you can plug that in and get the exact info you need.

I have recently started following you on Facebook. I'm trying to do the low carb diet and love the recipes. I'm sorry that people are mean in their post that is so not right. Thank You for sharing and as soon as I'm able I do plan on getting the cookbooks.

This means that you literally burn fat by eating Coconut Fats (in addition to coconut milk, coconut cream and coconut oil).

These 3 studies from large medical magazines are sure to turn the conventional nutrition world upside down!