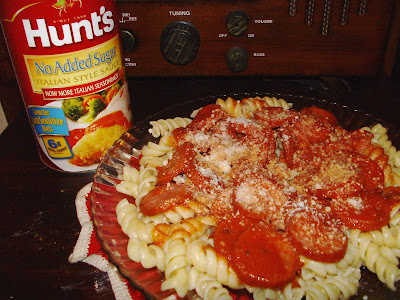 Back when I was young, a restaurant here in my town featured a multitude of spaghetti sauce choices to add to pasta. From what I remember, that was pretty much all they sold. We would buy a bowl, and head out to the tables to watch ice skaters down below in the Forum. Fun memory. Even though I can't remember what the name of the place was, I still do remember one of their recipes. We always called it Polish Spaghetti because the meat was polish sausages. They also used sauteed bell peppers and onions. So delish we went home and duplicated the recipe.

That dish has been out of my regular rotation for a while because it is just too carby. Tonight, I did still have half a polish sausage in the fridge, though, and it needed to be used up. So, I plugged this into the menu. Be careful there and be a label watcher. This one has only one carb for every two ounces. You still need to limit portions somewhat, but many sausages have 4 carbs for the same serving.

I used Dreamfield's pasta for John's serving. He only eats it once in a while. One serving there is supposed to be 5 carbs. Some have problems with it, some don't. It does tend to raise his blood sugars, so it is an occasional treat. I am going to freeze the rest of the pasta that I cooked up. That will be nice for a quick weekend meal or a weekday lunch.

A good find at the grocery store is the Hunt's no added sugar Italian sauce. We were happy to find that at just 6 carbs a serving. I couldn't add in the onions and peppers and still keep him in the low carb zone, but the sauce and sausage has so much flavor, it is still a nice meal. Just a shake of Parmesan cheese, and John was fed for the night. For the boy, I cooked up regular pasta and added a side of pears.

Posted by Lisa Marshall at 6:54 PM