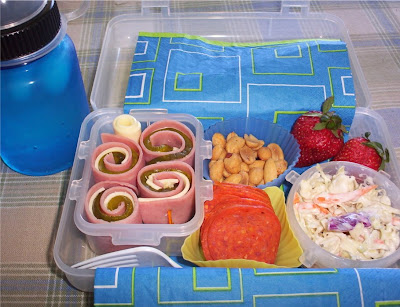 Okay, I know I am old and "behind the times" so they say. But I just discovered Bento boxes. You probably know about those Japanese lunch boxes with all the little compartments. They are definitely a meal with a plan!I don't really like Japanese food all that much, but the lunch possibilities with this system is amazing. With so much variety in one little lunch, it would get one out of a brown bag rut..and portion control is built in for you since there is only so much space!

It took less than 24 hours for me to become a Bento junkie. Now mind you, there are some Bento artists out there, but I don't plan to become one of those. None of my meals will ever come out looking like Hello Kitty or Mario. I want to spend less time in the kitchen, not more! But I also think that a meal that has eye appeal, and several different flavors to satisfy the palette is a good thing.

As usual, I am way too cheap to fork out the cash for one of those kits where all the components are already there to make it easy. Nope, I do things on the cheap. Let's start with the box. I homeschool, so I am always at the teacher supply sales. Last August, Staples had plastic pencil boxes ten for a dollar. Did I need ten? No. Did I get ten? Of course. It is better to get the three you can justify for a dollar than to pay a dollar each elsewhere. So, even though I had every marker we own, every colored pencil, and even a few craft projects in boxes, I still had empty ones. Now I have one less empty pencil box because this clear one just became a Bento box. Ten cents invested so far.

I went to Walmart and found some wonderful small food containers with snap on lids. I got an assortment of three for three dollars. Only two will fit in the Bento box, so that's another two dollars. My sandwich eating boys can use the other.

Now what to do with that extra space? These lunches are supposed to be packed pretty full. Then I came upon an idea. My silicone baking cups. They make perfect little containers for dry ingredients, and best of all, the shape themselves to the available room in the box. How cool is that? I already had them , but to be fair, my mom paid $3.59 for a dozen, and two will fit in at once. Of course, they can still be used to bake in too, so they do double duty. With tax, those would add up to about three for a dollar. No biggie. I found even cheaper, thinner silicon cups at Old Time Pottery. They work well too, and are especially good at shaping. That is the yellow one in the photo.

My plastic fork was free. The pretty napkin was from the sale table too. Oh, and the water bottle to match was 60 cents at Hobby Lobby. What a deal. It is summertime now, but next year, I will be packing my lunch at least twice a week, and my hubby's everyday. I'm thinking he might need a bit more food, but the Bento box would be great for salad fixings and snacks. There is room in the top for an ice brick. I also found it easy to attach the water bottle with a heavy duty rubber band from the produce department.

Here is what I chose for my first Bento lunch:

Deli Delights spirals - These used a new pickle I just tried-sandwich sliced dills, cut lengthwise. Those roll very well. You can't see in the photo, but two spirals are held together with a toothpick.
Peanuts
Pepperoni
Strawberries
Blue Cheese Coleslaw - Very easy to mix up, just coat some premixed coleslaw blend with a tablespoon of blue cheese dressing. Yum!
Ice water with lime

I haven't totaled it up, but I am pretty sure this is under our 12 carb guideline for one meal. It totally satisfied my appetite. Here is a shot of it packed to go. If you want to see some more ideas on American style Bento, try here. 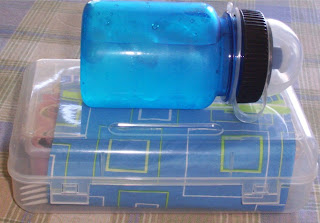 Order my original e-book or the latest version for couples and singles,  A Table for Two here

Posted by Lisa Marshall at 3:21 PM

Love your Bento Box. I've seen these years ago and like you I don't want to spend the money.
I like your ideas and I know my daughter who doesn't like sandwiches will love this idea. I already make similar lunches like yours but I like how it all fits in one big container. I'm off to do some shopping and hopefully I can find a big pencil box. Love your blog :-)
Gigi

Thanks so much for the encouragement. I have had a year off from teaching, but will be back at it soon. I am sure I will have many more bento style lunches in the future.