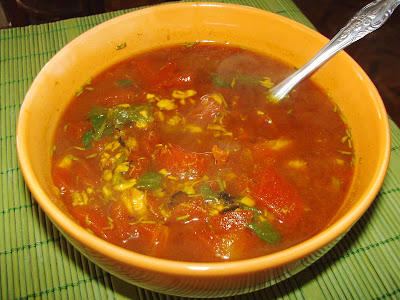 In honor of the Olympics, we are trying some more international flavors around here. You would think that all I am feeding us is seafood, but that is not true. We had hamburgers yesterday, chili tonight. It is just that these are the new recipes, and you have probably seen all my old standards. After a year of steady blogging, it is getting tough not to have repeats!

So I bought this frozen Tilapia. Never been a big fan of fish, even though I know it is good for us. I don't really count those breaded frozen fish sticks as sea food, do you? Have to admit I did feed those to my younger guys for years. I tried a couple of recipes with the Tilapia, and while they were edible, they just weren't blogworthy. I have read enough raving reviews of Tilapia Tacos to know someone must really like them. Just not me.

Never one to waste food, I am working my way through the bag. Today, tired of reading recipes, I ventured out on my own. I made a soup that--gasp-- I would actually make again. It is light on calories, but nice and spicy. It uses cilantro again. Oddly, I think that must be the draw for me. After all, I am still thinking about that Cilantro Shrimp.

Here's what I came up with today:

Spray a non-stick pot with cooking spray. Cook the fish for about two minutes on each side. Add tomatoes and half the water. When fish flakes easily, use a fork to break it into bite sized chunks. Add the seasonings and simmer about ten minutes. Serves 2.

I am cutting calories right now, but I saw several similar recipes with coconut milk added. That sounds delish.

hey...i can eat this on hcg! hooray! i sooo need to cook something yummy!

This soup peaks my interest. It looks very yummy. We are having parmesan talapia tonight for dinner. It's LC, too!

I've seen some interesting recipes for fish tacos on TV but I've never had the nerve to try them.

Came across your blog as I have two pieces of tilapia in the fridge from the fishmonger down the street. I need to use the fish, but am sick and wanted a spicy soup and boom! Came across your blog on google! Can't wait to try it out tonight and other recipes I see that look amazing as well! :) Thanks for sharing!

Absolutely Delicious!!! I am on a Low Carb Diet, this year I decided to give up all solid foods for lent. This is the best time of the year to lose weight.