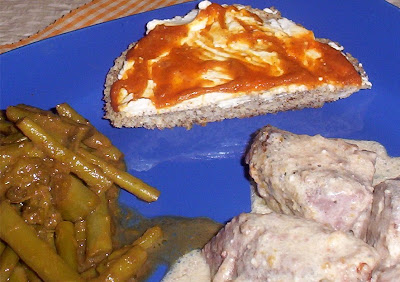 Tonight's dinner evolved into a butter theme. I was tinkering around in the kitchen this afternoon while my Pork Chop Alfredo was cooking. It didn't need my assistance, so I played around a bit with my side dishes. That is where the butter comes in.

I picked up a can of asparagus the other day. I have never tried the canned variety before, but I thought it might be less costly and wasteful than buying fresh. I was wrong! By the looks of it, the canners did not like cutting off those tough ends either. The asparagus spears alternated between extreme mush and total stem. It was really hard to eat this. To make it even worse, I had made the most delectable sauce to go with the asparagus. I would definitely recommend it with the fresh version. I think I will make it to serve again with other veggies. So sad it had to go on those crummy asparagus spears!

Cook butter in a small pan until it begins to brown. Watch it closely. Add the vinegar and soy sauce. They will foam up as you stir them in. Pour over vegetables.

In addition, I made a low carb toast using the recipe of my e-friend, Jennifer. You can find the recipe over here at her blog. I had a half a can of pumpkin left in my fridge, so I threw together a Pumpkin Butter with low carb ingredients. I might tweak this a bit more, but this is what I came up with today.

Mix all ingredients except gelatin. Heat on low heat in a saucepan for 15 minutes, stirring often. Add sweetener to taste. Add gelatin and mix well. Chill the mixture. Use as a spread with cream cheese.

John didn't like the pumpkin butter too much, but I like it. He never has eaten pumpkin butter or dip, or even pie, even though he likes pumpkin muffins. Go figure.

Email ThisBlogThis!Share to TwitterShare to FacebookShare to Pinterest
Labels: condiments