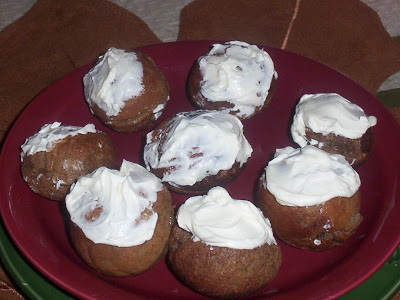 I am a sucker for a few things. Among them-- a great bargain. Add to that my curiosity with kitchen gadgets, and we have a new recipe. The other day, I found myself at Big Lots with a twenty percent coupon in hand and a kitchen gadget calling me from the clearance rack. I have passed up this gadget on the infomercials, though I do admit sitting mesmerized. (as most any cooking show will do) I have even passed by the Perfect Puff pan in that same clearance aisle. But this time, it was so cheap. I just had to try it. Yes. No. Yes. No. Finally, my mom said she would buy it and give it to me to try. You see, I have this tiny kitchen, filled to overflow with kitchen gadgets. But if it is actually hers...

This is not really the pan from TV I found out after I got home. It is an imitation, but pretty much the same system as the Pancake Puff, as seen on TV. This skillet is not cast iron like that one, but hey we paid about three bucks. It seems to work the same, although I did have some trouble resting it securely on my gas burners.

Not making standard pancakes, I searched online for a while. Nothing struck me. I guess this gadget is not the next low carb sensation. I decided to try one of my muffin recipes. I chose Nana Nut Muffins, only to discover that I was almost out of banana flavoring. So, I made banana maple batter instead. Just as tasty, I am sure.

One site showed me how to turn these little treats like the Danish cooks making Aebleskiver pancake puffs, so I mimicked their technique. Although the pan heated unevenly, and I burned a couple of puffs, the turning technique worked very well. The muffin batter is thin enough to turn the puffs three times during the baking to make a really round puff. The kit comes with a plunger device to fill the treats with a pudding or jam. I used a sweetened cream cheese mix. After I filled all the puffs, I used the extra as icing. Gotta say, these were fun to make. They are just a bit bigger than a mini muffin. One batch made ten.

I would like to try some savory puffs as well. Adapting the recipes to low carb is a bit of a challenge, but it is always fun to play in the kitchen! I'll keep you posted on more experiments. Here is my starter recipe:

Mix dry ingredients. Combine wet ingredients and blend into dry. Let batter rest for five minutes. Preheat pan until water sizzles. Fill wells in puff pan nearly to the top. When a "crust" has formed along the bottom, turn the batter a half turn and let batter run into the bottom of the well. Do this for all puffs. Turn again, once more putting the wet batter on the pan base. This will form a ball shape. Keep over flame until batter is set. Remove from pan.

Combine frosting ingredients and load into the plunger. When cool enough to handle, inject the cream cheese frosting inside each ball. Add remaining frosting to the tops of each puff.

These are a good size for lunchboxes and Bento lunches. With the filling inside, they don't really need a frosting, so they would stay neat. I am sure that there are lots of flavor combos which would be quite tasty. I think I will try omelet balls next. But I still have to get cracking on those marshmallows again. The rain is delaying our camping, but we are postponing to later in the weekend when the sun promises to return.

Posted by Lisa Marshall at 4:02 PM