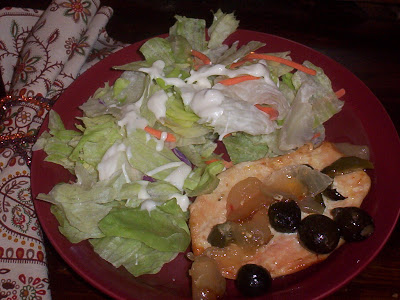 A 'Dump' meal. Doesn't sound too appetizing, but John told me three or four times how good it was. (even though he has had it before) That has to be a success. Tonight's no brainer dinner was Mediterranean Chicken Dump in the Freezer Favorites section of the e-book. After class was over and errands run, all I had to do was pull the dump meal out of the freezer and pop it into a dish and into the oven. Nope, I didn't even thaw! This one was waiting in a ziploc bag. An hour or so in the oven, starting with a cold oven so as not to break my dish, and the marinated chicken with olives and peppers smelled divine. It baked while I did other chores. With a fresh green salad, dinner was on the table with almost no effort.

Had to use the old camera, because we still can't get a new one to work. I think maybe it has too many options. Just like this dinner, sometimes simple is better.