When Chicken is Cheap 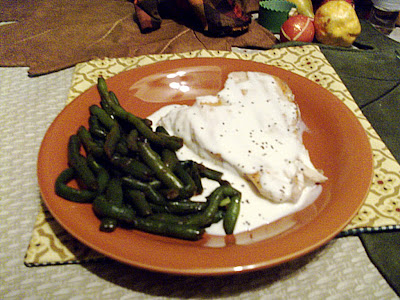 Great sale on boneless skinless chicken breast this week. Of course, they were sold in bulk packaging, but that is fine. I am never without a plan! My dear hubby brought we home a whopper big package of chicken that weighed in at 12 pounds. Partially frozen, of course. That does make it a bit more of a challenge. Here's what I did:

I let the solid lump of chicken thaw until I could easily remove the outer cuts. These, I made for dinner as Chicken George. Last night we chose Chicken Parisienne. That is a grilled breast topped with a sophisticated cream cheese and sherry sauce from the E.Z. Fix section of the e-book.So decadent and rich. My college boy really appreciated it. I made some browned butter sauce green beans on the side. These were much improved over those tough asparagus stems from the other day. That meal is pictured above, sorry the photo is not the greatest, I am still trying to figure out this new camera.

While that was going, I pulled some more chicken out and put it in the crock pot for Chipotle Chicken Shreds. That cooked on low all night long, getting all soft and spicy with green chiles. Yum. This is our Triple Play meal for the week, even though it is in the Freezer Favorites section. Flexibility is good. We will see the chicken in a soup, quesadillas and enchiladas later in the week. That's done. 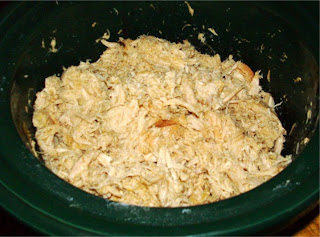 By the time I peeled away all those breast portions, the center was still frozen. I took advantage of that fact to make it into a dump meal. This time, I chose the Steakhouse Special marinade. It just took a minute to whisk that up, pour it into ziploc bags and then add the chicken. Now I have some tasty bird waiting in the freezer for another week. After all, who wants to eat chicken every night of the week? On second thought, I think my hubby could...

Today has been a productive Prep Day, although I did veer off course just a tad. Rather than making a breakfast Multiply Meal, I made a master mix of low carb baking mix. So far it seems to be working well. I used it to make a Mexican Fudgey Pie and 12 low carb buns for burgers and sausage sandwiches. Those two recipes will help cover four breakfasts this week. Yes, chocolate will be breakfast--instead of muffins. It's legal. Hope there is enough left; John keeps sneaking slices. I had better wrap that and hide it soon.

I also made a discovery for a new twist on an old low carb snack that is just too easy, and great for those of us who appreciate a little spice. I even managed to squeeze in making a dry mix for ranch dressing. I added that to some home made yogurt, and it tastes fabulous--especially with my hot new snack. I'll show you how these go together in blogs later this week. Right now, I have a boy home from college, and I would rather spend my evening with him. So I am out of the kitchen and off the computer for now. We are building our first fire of the season in the fireplace. Not counting camp fires, of course. We had plenty of those last weekend. I swear I can still smell the smoke in my car!

Posted by Lisa Marshall at 7:30 PM