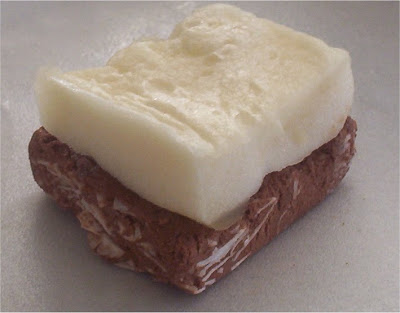 We had a great time camping this weekend, despite the fact that temperatures were well below normal for this time of year. Our family friends are also low carbers, so many of the meals were "Diner Friendly."

For our first lunch, we made a pot of stone soup. Remember that old child's folk tale about the villagers who added just a bit of this and a bit of that to make a community pot of soup from a starter of water and a stone? Well, all the camper families bring a surprise ingredient for the pot. This year's version was tasty and low carb too. We had sausages, cabbage, onion, bell peppers, chicken and rutabaga. Everyone liked it, and it is always a fun activity. 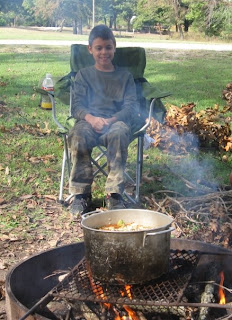 For dinner, my family had Hobo Dinners--foil packages stuffed with meat and veggies. Very easy to cook on a real campfire. NeeCee's bunch ate the Gumbo that was featured in the last newsletter. Yummy. For breakfast the next day, we both chose a campfire skillet. Ours was Cowboy Comfort Breakfast with sliced cheese rather than cream cheese. NeeCee's family had a scramble with bacon and eggs with peppers and onions. It looked pretty for campfire food. They also had diet cocoa.

I made my smores so we wouldn't feel left out when the marshmallows started toasting. I used the recipe from Low Carb Luxury. Mine still ended up with a bit of gelatin settling on the bottom. They are not too tasty alone, but were really close to the real thing when eaten as the top layer of a smore. To try that recipe for marshmallows, go here.

For the chocolate, I made a batch of chocolate coconut fudge. I made up the recipe as I went. I hope these measurements are right...

Melt chocolate in a measuring cup in the microwave. Add packets of Truvia or other non sucralose sweetener. Set aside. Beat cream cheese until fluffy. Add syrup, protein powder sweetener and coconut flakes. When well mixed, blend in chocolate. Pour into an 8x8 inch foil or paper lined pan. Press 16 almond into the top of the fudge, to make 16 pieces. Chill and cut into serving pieces.

To make smores, add a low carb marshmallow to the top of a piece of fudge. Enjoy. I didn't bother to make a substitute for the graham cracker. It is flavorful enough without it. Everyone at our camp out liked them--all except the avowed coconut hater, that is.

Posted by Lisa Marshall at 3:47 PM

And the avid coconut hater is just plain weird, because the smores were DELICIOUS!

Hello
Hey I like coconut very much and you have given nice recipe of chocolate coconut fudge.I think your measurements are right for this recipe.Thank you very much for sharing such a tasty recipe with us.