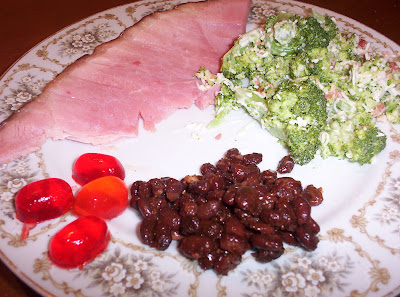 I hope everyone had a glorious Easter. Even though the weather was dismal here today, we had a chance to celebrate His resurrection among family, so it was blessed. As with most family functions, we had food. Some low carb, some not so low. Because ours was so good, we were able to behave ourselves at the table.

Our low carb menu consisted of a big Easter ham. I glazed it alwith a bit of maple syrup. We also had a family favorite--broccoli salad. Everyone liked that, low carb or not. In addition, my sweet mom made us some sugarfree jello jellybeans. They were really cute and were a hit with the kids.

My main experiment was a request from my hubby. He missed the sweet baked beans we had in years past. I substituted some black soy beans. I added some sugarfree ketchup, some liquid smoke, some bacon salt, some ham flavoring and some sugarfree maple syrup. They were good, although still a little firm. I buy canned black soy beans, and they seem to stay more firm than other types of beans. Anyone else have this problem? John, not having had baked beans in such a long time, still really liked them and had seconds at lunch. I guess the experiment was still a hit. I will tweak the recipe a bit, then post it when I have it perfected.

We also had the Tie Dye cheesecake I blogged about earlier in the week. My almost two year old nephew really liked that.

When I was just home, my friend NeeCee phoned to tell me about a really wonderful Easter experiment of her own. She hosted the Easter Dinner for her entire family, including her diabetic mom. She had a whole low carb feast on the table--hams, cauliflower au gratin, spinach strawberry salad, broccoli salad, dozens of deviled eggs and three desserts. At first the high carbers scoffed a bit, just putting small portions on their plates. Before she knew it, they were back for more. Even the picky little ones. She reported that she hardly had any leftovers.

NeeCee's mom has been diabetic for a long time. She counts carbs, but does not eliminate starches. Her normal routine is to substantially limit the amount of food she is able to eat because her choices have so many natural carbs. When one chooses to eat bread and potatoes, it doesn't take much food to spike blood sugars. She routinely goes hungry because her diet does not keep blood sugars under control. In fact, in their experiment today, her blood sugar reading was 197 before the meal. She ate all she wanted at NeeCee's feast today. Second helpings, three desserts and grazing all afternoon, but when she took her readings before dinner, her blood sugar had dropped to 164. That was a drop after eating much more food that she was accustomed to. NeeCee says we have a new convert to the low carb lifestyle. I am just hoping she finds a healthier way of dealing with her diabetes, and has a better quality of life. I know her family wants to keep her around for many more years.

Posted by Lisa Marshall at 7:33 PM