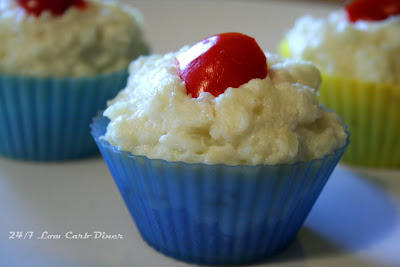 Not your typical cupcake. This is the cousin of the Cottage Pie. This cupcake is made of meat and topped with mashed cauliflower. Very much a hit with my men last night.

So this is not an original idea. I have seem similar savory cupcakes. I think this is cuter with the red bell pepper replacing the cherry on top. We all need a little fun at dinner now and then. These are easy to put together too. Just make your favorite meatloaf recipe. I seasoned mine with Wright's liquid smoke and added chia seeds as usual, 1 tbsp per pound. This time, I left out the egg, but you can add it in. Fill 9 silicon muffin cups with the meat mixture. Since I was just trying it out this time, I used one pound of ground chuck. Mine was 85% lean, but next time I would get at least 90%. I had to deal with some shrinkage, and had to drain some fat from each cup after baking. Leaner grinds would fix that problem. Bake those about 20 minutes until they are cooked through. Pour off grease if necessary.

While the meat bases are baking, steam a head of cauliflower. Drain it very well. Mash it with two tablespoons of butter and 4 ounces of a good melting cheese. I chose a Swiss/American blend, but almost went with cream cheese. Most anything will work. Add salt to taste. Process here, remember, not recipe. When the meatloaves are finished, remove them from the oven and use the mashed cauliflower as frosting. Top each with a slice of red bell pepper. Return to the oven for about 5 minutes.

We ate ours right out of the silicon cup. I provided spoons instead of forks so the guys wouldn't poke holes in the cups. These were fun to eat. It would be great to make extra for lunches at the office. I don't think they would be so great cold, but if you have a microwave handy or toaster oven, they would be fantastic. Just remember not to throw away the cups!

This is a great idea. I am new to your blog and have spent some time to browse through your earlier posts. I'm so glad I did that. I really like the food and recipes you share with your readers and I'll definitely be back. I hope you have a great day. Blessings...Mary

Thanks Mary. It always makes my day when someone comments--especially when they say nice things. The cupcake idea is not mine, but they did make for a fun meal.