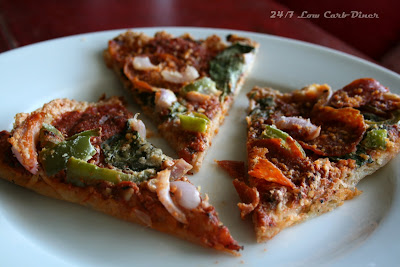 Let me tell you, this made a beautiful pizza! When I first put it together, I didn't think it was going to work. Couldn't imagine that. Jennifer is an amazing baker--and very thorough in her details. (I know that because she is also my editor)  All the doughs I have tried before were much wetter. I followed her directions even though my batch seemed crumbly. Sure enough. She once again knew what she was talking about. She said to lay a sheet of plastic wrap over the dough to roll it out. That worked like a charm. Probably the easiest crust ever, in fact. None of that stretchy elastic or super sticky business.

I made this with all the kids around and they kept wandering in asking what smelled so good. Mr. John's lunch. I ended up buying them pizza. I made a fire roasted pizza sauce that was incredibly tasty. Pretty sure the crust was really good too, but with the flavors I packed into that sauce, I can make no promises. At any rate, it did what it was supposed to do. Who can go wrong with 2 cups of cheese? I do love cheese. The crust was plenty cheesy, so just a sprinkle of Parmesan on the top was all we needed.

The crust is pretty too, even though I baked it on a cookie sheet instead of a pizza pan. I put mine on parchment and had no sticking problems at all. Wonderful thin crust, nothing like the cracker crusts we buy from pizzerias. Plus making it at home, we can top it with as much delicious stuff as we want. This one had pepperoni, green pepper and red onion. Oh and spinach made it soo much healthier! (grin) 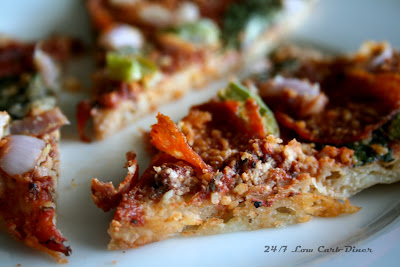 Jennifer's Pizza Crust recipe is on page 64 of Low Carbing Among Friends. Go find it and make one for yourself. The nutrition box said it serves 12. Umm, no. I was awfully glad to see later down she said it is fine to eat 2-3 slices with a salad. THAT is better. 1/12 of this pizza would never be enough. It would be like eating one potato chip as the famous ad said. Even with three slices, you still come in under 5 carbs and just over 300 calories. At that rate, maybe we could justify 4 slices...Eating like this does not feel like a diet. Go read the cute anecdote with the recipe. That story says it all.

Email ThisBlogThis!Share to TwitterShare to FacebookShare to Pinterest
Labels: pizza

Going to have to try this one!

This sounds do good... Love Pizza! Would love to have your recipe for Fire Roasted Pizza Sauce as well. Post it asap....Thanks so much for all the great ideas and recipes.

which volume of low carbing among friends?? :)