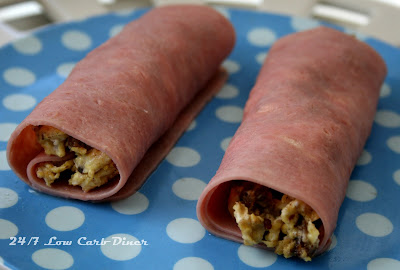 Yesterday I made a batch of Minute Sausage. If you aren't in on the Diner plan, that is a large batch of browned sausage, perhaps with some mushroom and onion browned in. I make it ahead of time, to package some up to throw in omelets, casseroles, scrambles, etc. Some went into yesterday's Pepper Ring Breakfast, which is a recipe in the April Diner News. More went into this mornings fun Hammy Breakfast Roll-ups. They are kinda like a breakfast burrito, but it is a slice of ham that wraps them up rather than a carby gluteny tortilla.

Of course, since the roll-up is a ham slice, you don't need to add the sausage. It gives a nice flavor boost though. The problem with some breakfast burritos is the way the scrambled eggs tumble out on your shirt. Not a good way to eat if you are heading out the door. This recipe solves that problem by melting some cream cheese into the egg scramble. Not only does it taste wonderful, but it adds a little "glue" that holds the filling inside neatly. Yum!


Scramble the egg with the pre-cooked sausage. Stir in cream cheese to melt. Spoon the egg mixture onto the slice of ham. Roll it up.

The recipe is for a single roll up. Just multiply the ingredients for the number of roll-ups you want to make. These are also good with mushrooms, onions, peppers, green chilies, you name it. If you can scramble it, you can roll it. If you need a fast, delicious breakfast, this is a great choice.

Ooh, this is something I can also send in my husband's lunches. Thanks for another great idea.

And I LOVE that polka dot plate. :-D